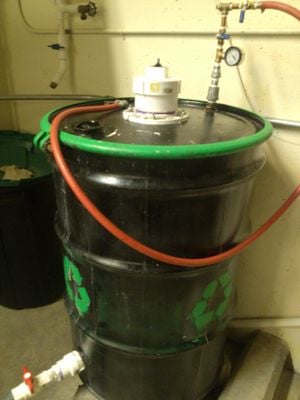 To address global climate change and mitigate greenhouse gas emissions, it is increasingly important to focus on the use of renewable forms of energy [1][2]. Also of increasing importance is the need for sustainable development to create and use renewable energy[3]. This page will address this need through the form of biogas produced through the process of anaerobic digestions with emphasis placed on barrel biodigesters. Barrel biodigesting is a form of anaerobic digestion of organic materials used to create and collect biogas and can easily be done on the homescale. The anaerobic process take place in a "barrel" (55 gallon steel drum or similar). The resulting products of this type of digestion are primarily biogas and nutrient rich effluent, but numerous other benefits exist[4].

Anaerobic digestion is a microbial process that takes place in the absence of oxygen and is a methanogenic process. During this process carbon matter is metabolized to produce a host of gasses. Anaerobic digestion is a relatively old process, with the first industrialized process taking place in 1859 and the first collection and use of biogas in 1895[5]. Anaerobic digestion is found in many different areas of the natural and engineered environment including, sediments, animal intestines, and landfills[6], and is a proven method for treating organic wastes with high moisture contents[7]. The organic matter that is metabolized undergoes a three step process or hyrolysis, acetic acid formation, and methane production[8]. Temperature has a large effect on the robustness of the anaerobic process and the rate at which biogas is produced. The two primary temperature categories are mesophilic and thermophilic[9].

Thermophilic digestion takes place between 45-60C. Despite the increased sensitivity of the system compared to mesophilic digestion, it does have attractive advantages and could be appropriate for certain scenarios. Thermophilic anaerobic digestion will have faster reaction rates, exhibit a higher rate of destruction of pathogens and weed seeds, and produce more biogas than mesophilic systems[9][4].

The pH of the system also has significant effect on the digestion process. The formation of methane in anaerobic digestion takes place between 6.5 and 8.0, with the optimal range of 7.0-8.0. Once the pH exits the methane production range, complete methanogenesis will not occur and methane biogas will not be produced[4]. The final products of proper anaerobic digestion are a gaseous product biogas and a solid waste product with a high nutrient content.

Biomass is the organic matter anaerobic digesters use to produce biogas, and is produced from plants through photosynthesis. Biomass can be categorized through many different methods, but the four main types of biomass are[1]:

Pre-treatment of the wastes is frequently in anaerobic digesters[13] and studies have shown a correlation between pre-treatment and increased biogas yields[14]. While not all pre-treatments are appropriate for all anaerobic digestion operations, mechanical pre-treatment is appropriate for digestion in both the developed and developing worlds due to the simplicity of the process. Mechanical pre-treatment consists simply of reducing the size of the particles that are fed to the digester which increases the surface area available to the microorganisms. Size reduction has been shown to increase the speed of digestion and increased gas production[14]. Studies have shown that reduction of the waste particles can increase gas production by up to 25%[15] and increase solids reduction by 25%[16].

Co-digestion is mixing primary biomass types to increase the speed and production of biogas through anaerobic digestion. There are several advantages of co-digestion, particularly increases in the production of biogas and improved fertilizer quality of the effluent[17]. The main advantage of co-digestion lies mainly in the fact that no individual feedstock is perfect, and mixing feedstocks allow for the minimization of imperfections by balancing nutrients[18]. Numerous studies have concluded that co-digestion increased the biogas production from an anaerobic digester, with particular focus being placed on manures and food waste mixtures[17][18][19]

The hyrdraulic retention time in the digester and the loading rate of the feedstock to the digester are two factors that are easily human controlled. Studies have shown that the retention time and gas production show very little correlation while loading rate and gas production show a much stronger correlation[20]. While it is possible to determine an ideal residence time for a certain reactor, the time will depend on what you are trying to maximize. Biogas production, methane yield, and effluent quality are all maximized at different residence times[21].

During the digestion process, organic nitrogen in the organic nitrogen is converted to ionized ammonia, a key part of 90% of nitrogen based fertilizers[20][23]. This nitrogen conversion allows the effluent to be applied directly to the plants with increased efficiency[20]. The anaerobic digestion process also inactivates weed seeds, bacteria and viruses (E.coli, Salmonella), fungi, and parasites that were in the feedstock. This inactivation is an important benefit of anaerobic digestion if the effluent is used as fertilizer[4].

The effluent tap shown Fig. 1 consists of a 1" PVC ball valve connected to the 2" threaded connection in the barrel through PVC coupling. On the inside of the barrel, a PVC draining system is constructed of 2" PVC with holes drilled in it (Fig. 2).

The gas hose shown in Fig. 3 consists of 1" threaded hole on the barrel lid connected to 1/4" brass pipe leading to the gas hose. The brass pipe connection shown features a pressure gauge and two ball valves. Depending on the desired simplicity of the system, only one valve is necessary and allows for the elimination of one of the ball valves and the pressure gauge. A 3/8" rubber hose is attached to the brass pipe system on one end and a 1/4" air chuck at the other. The air chuck allows biogas collection and storage in a bike or car tire.

The first step in construction is to find and seal any leaks or holes that may be in barrel. To find the leaks, fill the drum with water and exam the exterior of the drum for leaks. If leaks are found, mark the location of it for future reference. After all the leaks have been identified, empty the water from the drum and proceed with sealing the leaks. The leaks can be sealed with the application of tar to the location. Continue to fill the drum with water and patch leaks with tar until none are found[25].

The start up of an anaerobic digester is a key component to the success of the digester. Gas production will not reach its full potential until the digester has matured. While it is possible to start a digester with simply combining wastes and water in the digester and sealing it, this process will take an extremely long time to mature and reach its full capabilities. It is now commonplace in research and practice to "seed" the digester with effluent from another functioning digester[20][17][26]. The addition of this effluent will provide a starting block for the digester and increase the speed at which it reaches maturity. The gas produced during this "start-up" phase will not posses the same flammable characteristics of gas produced by a mature digester and should not be collected. It has been previously stated that mixing is beneficial to a mature biodigester, but the same cannot be said for the start-up phase. It has been shown that mixing during the start-up phase increases the time it take a new digester to reach maturity[27].

As previously discussed, organic material is needed for biogas to be produced. As the digester functions as a continuous tank reactor, it should be fed daily at the same time. The loading rate of wastes should be within the range of 1-6.8g/L*day[28]. To maintain a constant volume, an amount of effluent equal to the volume of waste added should be withdrawn[11]. After maturation of the digester, gas collection is ready to begin. Gas collection can either take place constantly through the use of a locking air chuck on the storage apparatus or periodically when biogas is needed.

There are significant social and economic impacts of biodigestion both in the developed and developing worlds. In both cases there are significant wastes of organic materials and increasing energy needs. While anaerobic digestion in the developed world occurs on a significantly larger scale than homescale systems the concepts of both are the same: produce usable energy from waste. On the developed scale anaerobic digestion takes place at waste water treatment facilities, breweries, commercial farms, and large scale organic markets all frequently practice anaerobic digestion[29][30][31]. Significant work is being done further bring biodigesters into the developing world. Projects in Peru and Nepal have shown significant impacts due to the introduction of anaerobic digesters. While these projects are certainly not replicated world wide, they are quite frequently performed with varying levels of success. These projects found positive health impacts from using a cleaner burning cooking fuel, economic impacts due to improved agriculture yields, environmental impacts of lower deforestation rates stemming from less wood fuel consumption, and social impacts on women and children not having to spend large amounts of time collecting wood[32][3].