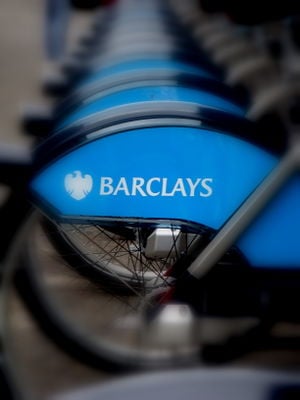 Barclays Cycle Hire is a cycling scheme in the city of London, UK.

The person that is accredited for bringing the cycle hire scheme to London was the previous former Major Ken Livingstone. Although Major Boris Johnson formally took credit for the cycling scheme since he was in office when it was launched. The idea caught his attention seeing the success that similar schemes were having in cities like Paris, France..[1] The plan was formerly announced by former Major Ken Livingstone on February of 2008. This is the first step to Livingstone's goal of having 5% of London's daily trips to be by bicycles.[2]

After further analyze of other cycling schemes around the world. The Barclays Cycle Hire was formally introduced to Londoners on July 2010 with 5000 bikes and 315 docking stations. The project is projected to have a cost of 140 million euros by the end of the first 6 years of operation. Barclays banking is sponsoring the cycling scheme for naming rights. They are contributing a total of 25 million euros or about 18% of the total cost over the next six years.[3] 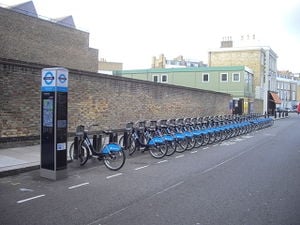 To use a bicycle from Barclays Cycle Hire customers must follow three simple steps.

Step 1: is to hire a bicycle. To do so all you need is a debit or a credit card.

Free up to 30 minutes

London has made sure that all the cyclers would have a safe infrastructure to ride on when it partnered up with Barclays once again to fund the construction of the Barclays cycle superhighways. Four Superhighways have already launched, CS2 which goes from Stratford to Aldgate, CS3 which goes from Barking to Tower Gateway, CS7 which goes for Merton to City, CS8 which from Wandsworth to Westminster, and with a further eight to be introduced by 2016.[5]

After the ride to the destination a rider must return the bicycle to the nearest bicycle docking station. Barclays and the city of London made sure to create a system in which they locate the nearest docking station with an empty bicycle spot. 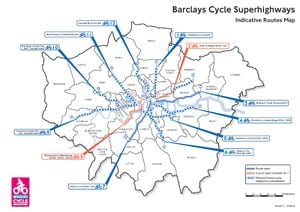 On October 2011, Serco Group plc (Serco), was awarded a extended partnership for the Barclays Cycle Hire scheme. The goal of the partnership was for Serco to work with the Transportation for London (TfL) on the expansion to East London, also to add docking stations in West London, all to increase the amount of bicycles available for use.[6]

The contract of nearly 50 million euros is marked to run until August 2015. This makes the total contribution by Serco to well over 190 million euros.[7]

On December 2013 there was an expansion of more than 2000 bicycles in the southwestern part of London. Major Boris Johnson said that, "The cycle hire scheme is going to be fantastic for southwest London. It will be a real benefit to local people, it helps the economy and is key to my aim of making cycling an integral part of the capitals transport network."[8]