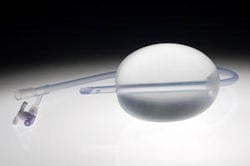 The Bakri SOS balloon is an obstetrical silicone balloon that has been approved by the US Food and Drug Administration. It was designed for one use only. The balloon is connected to a 24 French, 54 cm long silicone catheter. The balloon is inserted into the vagina in order to tamponade bleeding. There is a monitor that supervises excessive bleeding.