From Appropedia
Redirected from Artichoke 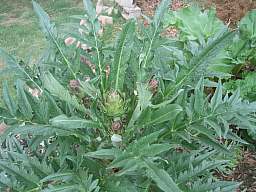 The globe artichoke is well known as a vegetable prepared from its large flower bud. What is less well known is that its leaves are commonly used as a medicinal herb. In Spanish it is called the alcochofa.

An infusion of the leaves is used especially to lower cholesterol. Its other uses include as a stimulant of the liver and gallbladder, for digestive disorders, irritable bowel and other bowel problems.