Arcata Marsh history of the land

From Appropedia
Redirected from Arcata marsh History of the Land

The Humboldt Bay, also known as the Eureka Bay, is an ecosystem full of life and activity. With no major fresh water source to feed the bay it is totally dependent on the ocean’s tidal rise and fall to flush and cleanse the Bay from pollutants and other matter that may be harmful to the ecosystem. The Bay is divided into three sub bays: South Bay, Entrance Bay, and the North Bay, or Arcata Bay. [1]

Arcata Marsh and Wildlife Sanctuary Prior to Construction[edit | edit source]

The Early Uses of the Arcata Marsh[edit | edit source]

Before the influence of the white settlers Humboldt Bay was the home to the Wiyots, who lived within the bay area off the land. As the white settlers started moving into the area in the mid 1800’s the Wiyots were pushed off their lands and out of the Bay. This greatly led to their demise but not extinction for there are still a number of them left around the Bay to this day. [1]

Figure 1: A 1949 aerial photograph of Arcata Bay and of the Arcata Marsh land.

The first white settlers to the Bay came due to the thought of striking it rich by gold mining on the Klamath, Trinity, and Salmon Rivers. The Bay was the ideal place to be used as an all-weather shipping port for goods and for transporting in miners, loggers and settlers to the remote northern regions of California. Immediately the land of the Arcata Marsh was sought after because it was on the northern side of the bay, closer to the Mad River and Klamath mountains. It was an ideal place to build up an industry to handle incoming commerce.

Figure 2: A 1949 aerial photograph of the Arcata Marsh land.

In December 1852, the Union Plank Walk and Rail Track Company began construction of a wharf and railroad running from the Plaza to the deep water in the Bay. [2] (Figure 1 and Figure 2 shows the remnants of the wharf stretching out in to Arcata Bay and the Land of the Arcata Marsh.) Completed in 1855 the wharf reached out into the bay 11,000 ft (approximately two miles). This wharf allowed sea going vessels to unload their cargo during any tide. Along with the wharf there was approximately twenty miles of railroad laid. The wharf is considered to be the first railroad in California. [3]

The yellow gold is what brought the white settlers to the Humboldt Bay area, but soon they discovered the value of the red gold that was found behind the bark of the redwoods. This only encouraged the shipping industry in Humboldt Bay to grow all the larger. Mills began to spring up around the Bay to harvest the redwoods. The wharf’s primary business soon became the exportation of milled lumber to San Francisco.

A business review of 1885 showed that “142 vessels visited the wharf and outgoing shipments included 22 million board feet, 38 million shingles and a million and a quarter of shakes. Agricultural products included over 260,000 pounds of wool and a million and a half pounds of potatoes.” [4] As showed by the business review the wharf was a major center for the northern Bay area and without it there was no other way to move lumber and goods out of the area. This all changed though in 1914 with the completion of a railroad to San Francisco that could handle all of the goods by train. This significantly reduced the traffic on the wharf and then with the advent of two world wars and a economic depression the land of the Arcata Marsh became quiet.

It wasn’t until 1946, just after the Second World War that the land of the Arcata Marsh became active again. The returning veterans found that there was more than enough work to be found in the forests and sawmills in the northern California region.

R. H. Emmerson built the first saw mill on the Arcata Marsh right over the top of Butchers Slough. A year later he sold the mill to Arcata Plywood Corporation which operated the mill to 1953. During this time the mill was expanded and two mills were soon in operation on the land, sharing a 13 acre log pond. The mill switched ownership again in 1954 to the Van Vleet Wood Products Corporation and again in 1958 to the Durable Plywood Corporation. [5] (Figure 3).

With the advent of the construction of the mills in the area the Arcata Bay marsh land began to slowly disappear. Nearly 90% of the 8,700 acres of wetlands surrounding the Bay were destroyed by the 1960’s. [1] 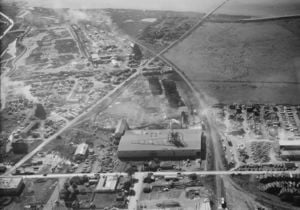 Other Uses of the Land[edit | edit source]

During the same time that the mills were in operation, the City of Arcata had constructed a wastewater treatment plant with only primary treatment to treat the City’s wastewater before discharging it into the Bay. (In Figure 3 the Arcata Wastewater Treatment Plant can be seen in construction up in the top left hand corner.) Prior to the Primary treatment plant there was just a pipe that went out in to the Bay where raw sewage was discharged from it. (In Figure 2 you can the pipe cross the mud flats and an area of dark water exiting the pipe and mixing with the bay water.) In 1956, a portion of the Arcata Bay was diked off to form the 55 acre oxidation ponds.

In the 1960’s, due to a number of fires and a poor economy, the mills that operated on theArcata Marsh closed. The City now saw the Arcata Marsh lands as a prime industrial development site, the only problem was that the Arcata Marshes were below sea level and needed to be filled. The City decided to dike off a 40 acre portion of the Arcata Marshes and turn it in to a land fill. The plan was that after a decade or two the marshes would be filled in with trash and then the City could develop the site into a marina with a boat launch and a deep water port plus housing could be developed there. After the first decade the land fill greatly deteriorated the land and the City was forced to close and cover the site up in 1973. The old land fill is now known as Mount Trashmore at the Arcata Marshes and Wildlife Sanctuary. [6] (Figure 4 shows a current photo of the Arcata Marsh with Mount Trashmore in the center, right of the photo). 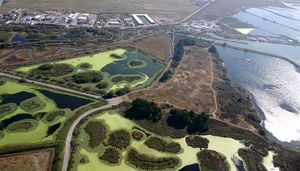 Figure 4: A current photograph of Arcata Marsh and Wildlife sanctuary.

The Current Uses of the Marshes[edit | edit source]

The current Arcata marshes are restored wetlands where the City of Arcata treats their wastewater and serves the public as a recreational area for bird watching and hiking. The only remnants of the past are the old log pilings that once supported the wharf and mills that were once in operation there(Figure 5). 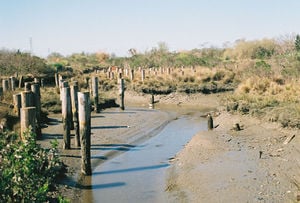 Figure 5: Remnants’ of the Wharf and Mills

There is a plaque at the far south westerly corner, close to where the remnants of the 11,000 ft wharf remain, which pays tribute to the men and women who brought industrial revolution to the northern California coast.

Through the Decades[edit | edit source]

1850: Arcata was settled by Europeans in the spring.

1855: The Union Plank Walk and Rail Track Company finished a wharf that extending into the deep water of the bay and some twenty miles of railroad. [3]

1872: A large portion of the wharf was swept of its pilings due to heavy seas and high tides. [3]

1874: Railroad from the wharf was extended to the Dolly Varden Mill. [3]

1875: Roughly 600 feet was added to the end of the wharf due to sediment filling in the bay and a railroad to the Jolly Giant Mill was built. [3]

1895: First diking of the Arcata Bay was recorded.

1914: Railroad from Eureka to San Francisco was completed.

1949: Development of the City of Arcata’s wastewater treatment plant. [6]

1957: Oxidation ponds were constructed and added to the Wasterwater Treatment Plant. [6]

1966: The Wastewater Treatment Plant put in place a facility to chlorinate and dechlorinate the wastewater. [6]

1973: The land fill was covered and sealed due to degradation of the marshlands. [6]