Tertiary treatment of effluent provides a final stage to raise the quality of wastewater before it is released into the environment. A treatment plant may opt to use more than one tertiary treatment process, such as combining nutrient removal with mechanical filtration. If disinfection is practiced, it is always the final process. Tertiary treatment is also called advanced treatment, "effluent polishing", or in the case of the Arcata Marsh "enhancement."

Filtration
After secondary treatment there are generally still some suspended solids left in the effluent. The main reason for this is that the secondary process is not perfect at removing microorganisms left over from the biological treatment processes. This "biological floc" can be filtered out mechanically by using a multimedia filter that has progressively smaller and smaller filter grain sizes. This reduces the amount of back washing necessary to clean the filter.

Nanofiltration
Nanofiltration is a relatively recent membrane process used most often with low total dissolved solids (TDS) waters such as surface water and fresh groundwater, with the purpose of softening (polyvalent cation removal) and removal of disinfection by-product precursors such as natural organic matter and synthetic organic matter[1]

Ultrafiltration
(UF) is a variety of membrane filtration in which hydrostatic pressure forces a liquid against a semipermeable membrane (Figure 1). 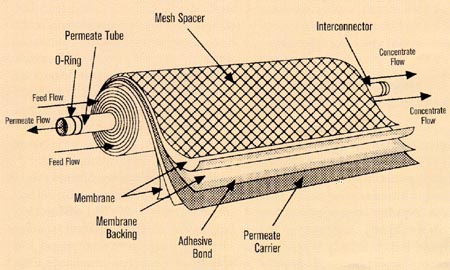 Nutrient removal
Wastewater may contain high levels of nutrients such as nitrogen and phosphorus. The excessive release of these nutrients to the environment can cause the overgrowth of weeds, algae, and cyanobacteria (blue-green algae). A rapid growth in the population of algae can result in an algal bloom of a magnitude such that the numbers are unsustainable. Eventually most of the algea die. The decomposition of the dead algae by bacteria depletes the dissolved oxygen in the water. As a result most or all of the animals living in the water die. This creates more organic matter for the bacteria to decompose, continuing the cycle. In addition to causing deoxygenation, some algal species produce toxins that contaminate drinking water supplies. This scenario is typical of the Nitrogen cycle. Nitrogen is typically excreted or released by aquatic organisms in the form of amonia. This in turn is converted to ammonium by microorganisms which in turn is a nutrient that plants use for growth. The plants are then in turn eaten by creatures, thus completing the cycle (Figure 3).

Different treatment processes are required to remove nitrogen and phosphorus. Phosphorous is generally removed using chemicals such as alum, or ferric chloride which precipitate to form a salt and hydronium or hydroxide ions (Figure 2).

These ions can cause the waters pH to fluctuate. Generally lime is used to stabilize the pH of the effluent. These reactions require a settling basin to remove the precipitants.

Removing nitrogen can be accomplished using either chemical or biological processes. Nitrogen is generally present in the form of ammonia. The chemical process simply raises the pH of the effluent.

This converts the ammonia to ammonium which can be removed from the water simply by passing large quantities of oxygen through it. The biological process uses activated sludge for an extended period of time, typically around 15 days.[3]

The purpose of disinfection in the treatment of wastewater is to reduce the number of pathogenic microorganisms in the water to be discharged back into the environment. The effectiveness of disinfection depends on the quality of the water being treated (e.g., cloudiness, pH, etc.), the type of disinfection being used, the disinfectant dosage (concentration and time), and other environmental variables. Turbidity will be treated less successfully since solid matter can shield organisms, especially from ultraviolet light or if contact times are short. Generally, short contact times, low doses and high flows all mitigate against effective disinfection. Common methods of disinfection include ozone, chlorine, or ultraviolet light.

Chlorination remains the most common form of wastewater disinfection in North America due to its low cost and long-term history of effectiveness. One disadvantage is that chlorination of residual organic material can generate chlorinated-organic compounds that may be carcinogenic or harmful to the environment. Residual chlorine or chloramines may also be capable of chlorinating organic material in the natural aquatic environment. The presence of chlorine gas in the atmosphere can pose immediate and serious hazards to the health of any person breathing the air. Large schale declorination operations are generally conducted indoors. All rooms in which chlorine is to be stored or handled should be adequately ventilated to the outside. Since chlorine is heavier than atmospheric air, fans are generally used to exchange the air. [4]Further, because residual chlorine is toxic to aquatic species, the treated effluent must also be chemically dechlorinated, adding to the complexity and cost of treatment.[5]

Ultraviolet
(UV) light can be used instead of chlorine, iodine, or other chemicals. Because no chemicals are used, the treated water has no adverse residual effect on organisms that later consume it, as may be the case with other methods. UV radiation causes damage to the genetic structure of bacteria, viruses, and other pathogens, making them incapable of reproduction. The key disadvantages of UV disinfection are the need for frequent lamp maintenance and energy use; and the need for a highly treated effluent to ensure that the target microorganisms are not shielded from the UV radiation (i.e., any solids present in the treated effluent may protect microorganisms from the UV light). In the United Kingdom UV is becoming the most common means of disinfection. This is because of concerns about the impacts of chlorine in chlorinating residual organics within the wastewater and in chlorinating organics within the receiving water. Edmonton, Alberta, also uses UV light for its water treatment.[6]

Ozone
Ozone is unstable and reactive and oxidizes most organic material it comes in contact with, thereby destroying many pathogenic microorganisms. Ozone is considered to be safer than chlorine because, unlike chlorine which has to be stored on site (highly poisonous in the event of an accidental release), ozone is generated onsite as needed. Ozonation also produces fewer disinfection by-products than chlorination. A disadvantage of ozone disinfection is the high cost of the ozone generation equipment and the requirements for highly skilled operators.[7]