A saltwater marsh is a specific ecosystem with benefits to humans and the environment. A low-lying, nearly level coastal grassland governed by the seasons and the tides, saltwater marshes are one of the most productive areas in the world. They are found on the edges of estuaries which, unlike swamps, are more shallow. Estuaries are the places where rivers meet oceans, and are enjoyed by people for homes, fishing, hunting, swimming, and for wildlife observation. Saltwater marshes have the benefits of filtering estuary water of sediment and toxins and acting as storm surge protection for more diverse upland regions.[1] [2]

Arcata's Saltwater Marshes are part of the Arcata Marsh system in that they serve as a refuge for species of birds and other animals that are enjoyed by watchers. See Figure 1 for a layout of the saltwater marshes in this overview of the Marsh system.

Water flows slowly in the marsh due to gradual slopes and plant/organism networks, so sediment is deposited. Sediment deposits build up enough to support plant species that otherwise wouldn't grow in saltwater marshes. Sediment can consist of organic matter (salt marsh peat). The sediment is however low in nutrient content, being depleted of nitrogen by microbes. It is high in cellulose, however, which is doubled in protein density when it is broken down. [6] 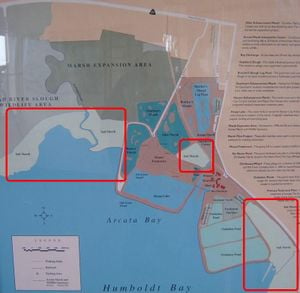 A few grass types grow in lower and upper marsh zones, which are characterized by salt and under-water tolerance. They are able to excrete salt from their leaf surfaces, and some send salt to their extremities which break off at the end of each growing season. These grasses are able to exchange oxygen to and from roots, which are underwater, by means of their aerenchymal (airy, gas-exchanging root) tissue. Further aiding gas exchange in some species is a mechanism for sending salt to the roots/stems, where it's higher concentration than the surrounding water enables osmosis of water into roots.[7]

Organisms such as marine mollusks and other animals consume primary producers and consumers. Their feces, rich in nitrogen, helps fertilize the marsh grasses.

Concerns and the Future[edit | edit source]

Over half of the nation's people now live and work within coastal counties. Their cumulative impact can be significant on salt water marshes. Destruction can be caused by filling of marshes for new homes, ditching to control mosquitoes, diking to create impoundments and building canals for flood control. In Arcata's case, European settlement contributed to 90% saltwater marsh destruction. Since 1980, 50 new acres have been reinstated with a new marsh to be built from funds from the Environmental Enhancement and Mitigation Program on 75 acres.[8][9] [10]

2007: A new study reveals that a salwater marsh island near New York City could vanish within the next 5 years due to sewage dumping.[11]

2001: Researchers find evidence that potentially hazardous fecal bacteria from seagulls could pollute recreational beaches in California. Saltwater marshes, a seagull habitat known to filter pollutants from the environment, may be flowing too quikly to effectively filter the pollutant.[12]

2000: Drought causing record low water levels in the Mississippi River combine with unusually low summer tides in Lousiana to cause saltwater marsh conversion to mud-flats. The solution, according to the Governor, is in monitoring wetland conditions and optimizing management of available fresh water.[13] 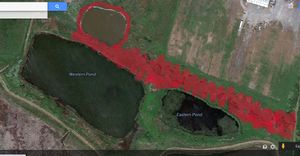 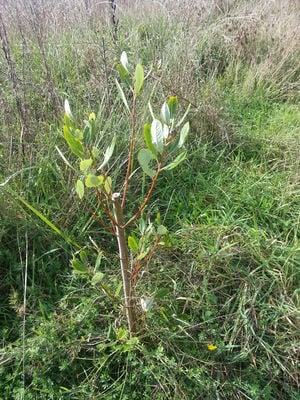 Willow planting is a common ecological restoration technique in California, which is done for purposes of bank stabilization and habitat improvement. Arroyo willow can act as a food source, cover, and nesting structure for wildlife[14]. In the Arcata Marsh, the primary goal was to improve wildlife habitat. During the 2014 event, sprigs were deliberately cut longer than usual - about 3-4 feet - as one of the organizers found this technique equally successful at taking root (compared to 2 feet cuttings) and faster in generating cover. Bottoms of sprigs were clipped in at a sharp angle so as to produce a point capable of driving out air pockets when inserted into the ground. Holes were created using willow bars, then the sprigs were inserted by hand or with wooden mallets, with careful attention to clip off split tops from hammering (a split top is believed to kill the sprig). All sprigs were inserted at least one third of their total length into the earth to ensure best chances of successful rooting. The event took about four hours.

On October 15th, 2014, the sprigs looked like they were doing well. New foliage has appeared, although they aren't capable of providing much cover or habitat yet. It appeared that the majority of the sprigs took, excluding a portion which appear to be situated over an old cement building foundation, which prevented them from tapping into the water table.

Page data
Retrieved from "https://www.appropedia.org/w/index.php?title=Arcata_Marsh_saltwater_marshes&oldid=617889"
Cookies help us deliver our services. By using our services, you agree to our use of cookies.
Categories:
Maintenance categories:
Comments
Privacy policy · About Appropedia · Disclaimers · Mobile view · Content is available under CC-BY-SA-4.0 unless otherwise noted.
</html