In 1972, the Clean Water Act [3] prohibited discharge wastewater into any enclosed bay or estuary unless it could demonstrate "enhancement of the receiving waters."[4] The existing waste water plant at the time was only treating their water with primary treatment before releasing it into the bay. The most economical thing for the City of Arcata to do was expand the existing facilites to treat the waste water even further before releasing it into the bay.[5]

In 1977, the idea of enhancement ponds were developed and Dr. George Allen, Dr. Bob Gearheart, Public Works Director, Frank Klopp and City Councilman, Dan Hauser, pushed the idea through the city and county councils. [6] The city was given permission to install the ponds to enhance the discharge water. By 1986, the marshes were completed.

The enhancement ponds are part of the tertiary treatment system of the waste water plant. Secondary treatment process and disinfection can remove 85% of the BOD and suspended solids and nearly all the pathogens, but there are pollutants (nitrogen, phospohrous, soluable COD and heavey metals) still lingering.[1]

This water is treated in the enhancement ponds where biological processes remove the remaining pollutants before the water is released into the bay. Phosphorous can be removed by a chemical percipitation using one of three compounds: ferric chloride, aluminum or lime.[1] Nitrogen needs to be removed from the water in order to control the algae blooms. This can be done biologically or chemically. The nitrification-denitrificationprocess is used at the enhancement marshes. 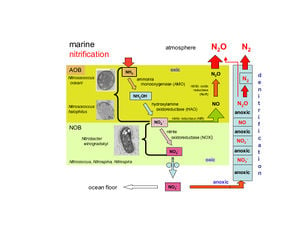 The water which has been treated by the chlorine has levels of BOD and Total Suspended Solids (SS) less than 10 mg/L and Total Inorganic Nitrogen (TIN) is less than 5mg/L.[7]

Water starts in the George-Allen marsh, then travels to the Robert Gearheart Marsh and finally to the Dan Hauser marsh; this process can take up to 9 days. [8] Effluent from the Dan Hauser marsh is treated by chlorine a second time and is pumped into the bay. [9]

Plants are essential for the Enhancement Marsh to be successful. Plants help clean the water by providing habitat for fish and birds that eat algae and by providing cover to help control the growth of algae. Willows are known for their ability to absorb toxins out of the soil and cat tails and other grasses are good for habitat and shade. Plants play a role in nitrification-denitrification. The whole ecosystem of a marine environment in Figure 1 is necessary for the process to succeed.

Biodiversity is an important factor in creating a realistic environment. Using native plants in the landscape is key for restoration and rehabilitation. Friends of Arcata Marsh (FOAM) has complied a list of common plants of the Arcata Marsh. These plants include:

Figure 12. The pipes to and from the marsh under the water. 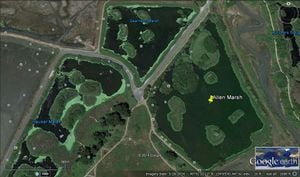 The Enhancement Marshes of the Arcata Wastewater Treatment Plant are all currently in working order. They also continue to hold aesthetic and recreational value to the community.

On two visits to the site I encountered several walkers, joggers and bird watchers. Additionally, there appears to be abundant wildlife and biodiversity within these marshes.

In an interview at City Hall, Julie Neander said that the City of Arcata is still conducting research on whether UV radiation, rather than Sulfur dioxide, as an appropriate method of dechlorination for water coming out of the Chlorine Contact Basin into the Enhancement Marshes and Arcata Bay. Currently, effluent from the the chlorine contact basin is divided into two streams, one portion being discharged directly into Humboldt Bay and the other being discharged into the system of enhancement marshes (EPA 1993) (see flow diagram for more info).

Page data
Retrieved from "https://www.appropedia.org/w/index.php?title=Arcata_Marsh_enhancement_ponds&oldid=620756"
Cookies help us deliver our services. By using our services, you agree to our use of cookies.
Category:
Maintenance categories:
Comments
Privacy policy · About Appropedia · Disclaimers · Mobile view · Content is available under CC-BY-SA-4.0 unless otherwise noted.
</html