The city of Arcata is a progressive thinking rural town situated in Northern California, an area with a wealth of natural resources with little to no industry remaining after the collapse of the timber and fishing markets. This small town has taken a once neglected and degraded land, a product of city waste and turned them into a valuable resource that provides economic input to the local community, establishes a sanctuary for birds and wildlife, as well as recreational activities for locals and tourists.

The original inhabitants of Humboldt Bay were the Wiyot Indians. Having lived in the bay and surrounding areas for thousands of years the natives found everything they needed for sustenance in the bay. This harmonious relationship was to come to an end with the arrival of white settlers and the Gold Rush in 1849. By 1870, tide gates were installed and diking around the bay began to provide agricultural lands for the newly arrived settlers. Thus, the bay was transformed from its original state of a brackish salt-water tidal marsh system to a fresh water "grazed lands" system. Further alteration of the wetlands came from the timber boom-taking place in the 1940's. The effects of hasty logging practices that utilized upstream water corridors as transportation routes for fallen logs changed stream morphology and degraded stream health and fisheries from excess sediment being added to the system. In 1964 an additional 40 acres of marshland was filled in to site an ocean side landfill. Less than 10 years later, in 1970, the site had contaminated the surrounding land and toxic leachate had found its way into the bay. In 1973 the site was condemned by the Department of Health and Arcata had to decide what to do with the contaminated site. A few ideas: a golf course, baseball field a motor cross area, a nature center and marsh recreation area. Ultimately the city decided on the latter choice.

Since its opening in 1986 the integrated wetland wastewater treatment of the Arcata Marsh and Wildlife Sanctuary has been a success in treating the effluent of the community, providing economic input, establishing a bird and wildlife sanctuary, and enhancing the health of the community.

Environmental Enhancement. Not only has the marsh system reduced Arcata's ecological footprint by reducing the amount of energy and chemicals necessary to process City wastewater it has taken a once abandoned site and turned it into a valuable resource. The site of the Arcata Marsh and Wildlife Sanctuary is situated on an abandoned landfill that was once contaminating the Bay with leachate. Now the site serves as a rest stop to over 300 species of birds or mammals and habitat for up to 100 species of plants and 6 species of fish.

Community Health. The Arcata Marsh and Wildlife Sanctuary provides over 225 acres of open out-door activity that is free to the public Figure 1. Five miles of trails provide hours of enjoyment to hikers, bikers and birdwatchers alike.[1] Additionally, the Redwood Regional Audubon Society offers bird watching tours every Saturday morning beginning at 8:30. The Marsh also serves as a outdoor science room for educators and students at Cal Poly Humboldt and local high schools. 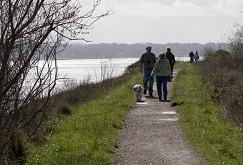 Wetlands enhance water quality, provide flood control, recharge ground water supplies,and maintain diversity within the system. Wetlands definition from Ward and Trimble (2003)- any site with soil development, biotic community, or hydraulic behavior that is dominated by the fact that it is at least periodically saturated with water. note: definition excludes deep water.[2]

Wetlands serve to improve water quality by acting as sinks. They remove sediment and nutrients entering our water courses from natural and anthropogenic inputs.

Wetlands serve as reservoirs during heavy storm events or peak flows of a river.

Wetlands recharge ground water supplies by acting as sinks. When surface runoff flows into a wetland it acts as a detention pond where excess water will eventually percolate into local or regional aquifers.

Wetlands act to maintain plant and wildlife diversity by providing an environment for hydrophilic plants to grow and habitat for migrating birds.[3] 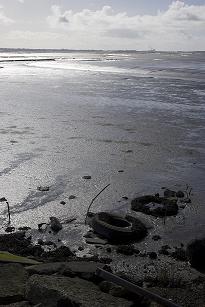 In the past, land use practices saw water saturation as a "nuisance" to development and many of the nation's wetlands were filled in.[5] Some have just been degraded as their importance is not well understood Figure 3. As U.S population[6] is increasing by approximately 300,000 people each year the demand[7] for water used in agriculture and industrial processes increases degrading our resources of fresh water still further. Adding to the depletion of fresh water resources is the loss of over half our nation's wetlands[8] that help improve water quality, provide flood control, groundwater recharge, provide habitat for wildlife and serve to improve the health of the community through recreation activities.

It is only in recent years that the field of science is beginning to understand the importance of wetlands in maintaining water supplies, ecological integrity and community health. The world's population is running out of fresh, potable water. Although, roughly 70% of the earth is covered by water less than 1% is fresh water available for human use.[9] Municipal sources are being degraded in quality[10] from the addition of caffeine and pharmaceuticals, complicating the treatment of water while threatening the healthy functioning of water bodies and the life forms that depend on them. Through the creation of constructed wetlands[11] wastewater can be treated in an environmentally friendly manner while at the same time creating an environment that is enjoyable to humans, creates economic incentive and provides habitat that is suitable to wildlife.

Page data
Retrieved from "https://www.appropedia.org/w/index.php?title=Arcata_Marsh_appropriateness_-_why_wetlands&oldid=666480"
Cookies help us deliver our services. By using our services, you agree to our use of cookies.
Categories:
Maintenance categories:
About Appropedia · Policies · Contact · Content is available under CC-BY-SA-4.0 unless otherwise noted.