Analysis of the various types of mills 1

Analysis of the various types of mills[edit | edit source]

Document produced as part of a curriculum for a second year faculty at the Polytechnic ULB, March 2006

In developing countries, cereals have always taken a dominant place in the diets of the poorest population. In West Africa, the millet, sorghum, rice and maize provide the people most of their caloric ration (up to 80% of the daily needs). Thus, on average, 170 kg of grain per year and per person are consumed.

However, from the harvested grain to a cooked meal, the grain must undergo a series of preparations. It is indeed in the form of meal or flour that the cereals enter in the make-up of the dishes, and are unique to each region. Their transformation too is essential and plays a major economic role in countries in the developing world.

This report, made for ISF-IAI, Ingénieurs Sans Frontières -Ingénieurs Assisitance Internationale, discusses the process of grinding, and in particular, the choice of the mills for developing countries. It is therefore directed especially to NGO's seeking information on equipment, adapted for these countries.

This entire document is divided into three parts:

• The third part consists of documents grouped in a folder, and containing homemade plans of different types of mills.

This document is therefore an aid in the choice of a mill, especially when it is intended for milling grain.

In countries undergoing development, the main use of mills and grinders is for cereals. This document will therefore concentrate mainly on four cereals occupying an important place in many developing countries: maize, rice, sorghum and millet. While wheat is obviously a very important grain in Africa, it is either imported or it is grown in large farms and processed into flour in large mills. In countries south of Sahara, the hot, dry climate does not allow the cultivation of wheat. In these countries, millet and sorghum account for over half the consumption of food. Fonio is also little cultivated (see image 1). Wheat and fonio will not be covered in detail in this document.

Grains are the seeds of cultivated herbaceous plants. They all have a quite similar structure, whose variation determines the bulk of their treatment. They consist of: the seed which gives the seedling, the kernel called endosperm or albumen, storage tissue that provide the seed reserves for its growth (until the first leaves), and protective coverings or brans, which include the testa and pericarp. These communal characteristics hide, in fact, shapes, sizes, compositions and very different textures depending on the type of cereal, each one requiring a specific post-harvest treatment. Nevertheless, some general principles can be applied to all species. This is summarized in the following paragraph.

B. The post-harvest operations[edit | edit source]

The cereals pass through different stages in a long and sometimes complex chain ranging from the harvest to the consumption. That is what we commonly call the post-harvest operations, and they are summarized in image 2 below.

These operations include three distinct sectors. The first goes from the harvest to the storage of the grain, the second constitutes the first transformation, and finally to be consumable, the products pass the second stage of processing.

This document on mills is only concerned with the first stage of processing, especially the milling and grinding.

In addition, although the mill is mainly used for grinding grain, it can also be used for grinding oilseeds (peanuts, ...), pulses (beans, soy seeds, ...), for grinding cassava, and many other dry products (bones, shells, ...), this means an adjustment for each type of mill must be performed (see below).

To learn more about a wide range of crops (fruits, grains, tubers, vegetables, ...), including their post-harvest processing, their chemical, physical charisteristics or their different diseases and the economic and social considerations, the Post-harvest Handbook of the United Nations Food and Agriculture (FAO) website can be checked out at: http://www.fao.org/inpho/content/compend/toc_main.htm

The differences in shape, size, composition and texture between the different types of cereals (see Table 1 below), but also between the different varieties in one species induce specific transformation processes. Before the milling or the cutting, each of these grains therefore requires a special treatment. A brief overview is given below: 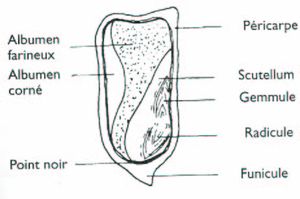 As is a cereal native to tropical America, maize is a grass whose culture is one of the most popular in the world. Maize can be harvested either as ears or as grain. The harvesting of ears can be done by hand or by using appropriate agricultural machinery (corn-picker). The harvested ears are deprived of their leaf envelopes (spathes) and then subjected to manual or mechanical hulling. In family-based culture and when the harvest takes place during the dry season, the ears (with or without husks) can be dried in the sun and then kept sheltered. In industrial culture, however maize is harvested using only mechanized systems (harvester-huller or combine), able to provide grain ready for drying or sale. At the time of harvesting, especially during rain periods, the maize kernels have a too high water content to allow good preservation, so before proceeding to storage, we should dry the product in order to lower the humidity to 14%. The artificial drying of grain, obtained by the circulation of dry and heated air, is done in facilities located in collection or storage centers, or in processing units (mills, livestock feed factories, etc..) equipped with appropriate drying. Once dried, the maize is cleaned, and stored (in bags or in bulk) in factories or silos. The dried maize is cleaned and ready for sale or for further processing.

In human nutrition, the fresh ears of maize can be eaten in the form cakes made from a paste obtained by cooking the grain, but it can also be consumed as flour or meal obtained after shelling and grinding. The processing industry also uses maize in the production of oils and margarines, feed, beer, food for children, soap, glue, varnish.

File:Agriculture manual 3 1 image 4.jpg
Structure of a grain of rice. After fao.org

Rice, as a grass native to tropical Asia (China and Indochina), it is the staple food of much of mankind. In Africa, the the Asian method is used in flooded rice fields. When they reach physiological maturity, the rice ears are cut and left on the field in sheaves for a pre-drying. Then we perform the beating manually or mechanically, to separate the paddy rice ie the whole grain and its protective envelope (balls) of the straw. When the rice is harvested using harvester-hullers, the cutting and beating operation takes place simultaneously. After beating the paddy rice contents often contain impurities (soil, stones, residues, plants, etc..) and its water content exceeds 20%. To be able to store or hull it, it is therefore necessary to proceed to the pre-cleaning, and then to the lowering of its moisture content by drying to about 14%.

This can be done naturally, by exposing the rice grains in the air and sun, and by stirring them frequently, or it can be done artificially, by subjecting the paddy rice on to a flow of dry and moderately heated (inside mechanical dryers) air. Once dried, the paddy rice is cleaned before being stored (in bags or in bulk) in stores or silos. The dried paddy rice is cleaned and ready to be machined, that is to say, subjected to the following treatments:

White rice, after the sorting, can be subjected to other polishing or glazing (with a mixture of talc and glucose) treatments: the purpose of these treatments is to improve the value of the commercial product and to prolong its shelf life. The resulting rice is ready to be packaged and marketed. 100 kg of paddy rice treated at industrial processing centres yield about 60 kg of white rice, 10 kg of broken rice, 10 kg of bran and flour, and 20 kg of balls. Because of its high nutritional value, rice is consumed mainly through food. Sometimes the rice is passed through a mill to make flour. However, this use remains limited. In industry, it is used to produce alcohol, beer, starch, oil and other derivatives. The by-products such as the broken rice and the flour are often intended for use in animal feed. The rice balls are sometimes used as a fuel and their ashes as fertilizer. 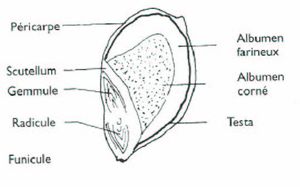 Sorghum is a grass native to Central Africa (Ethiopia, Sudan) and Eastern Europe. Sorghum is widely cultivated in Africa and elsewhere. It is more resistant than maize and other cereals to drought and it is therefore commonly and advantageously grown in arid regions where rainfall is rare and unpredictable. It is a useful food crop because almost all sorghums contain more protein than corn.

When they reached physiological maturity, we cut particles from the sorghum and we dry them in the sun. The grain ears thus obtained can be stored in traditional granaries, or directly moved to the manual or mechanical beating. Similar to rice, but much more rarely performed in tropical areas, is the simultaneous beating and cutting by combines. In hot climates with low rainfall, we may postpone the harvesting of sorghum until the grain has completely dried in the field.

If the grains have a moisture content above 13%, we must dry the product before it can be stored or treated. Once dried, the sorghum is cleaned, and then stored (in bags or in bulk) in factories or silos. The cleaned and dried sorghum is then ready for sale or for further processing.

We can consume sorghum, similar to maize, by using the flour or meal which is obtained by shelling, and grinding. The processing industry employs this cereal in the production of livestock feed, beer, oils, glues or adhesives, etc.. 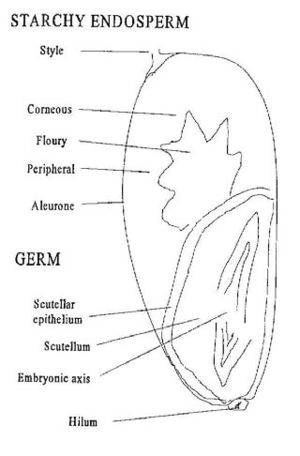 Structure of a grain of millet. After www.fao.org

The term "millet" refers to many herbaceous plants with very small seeds, widespread in Africa and Asia. The millet grains are hard compared to maize, sorghum or wheat. Millet has the smallest cultivated grains, with grains that are 2 mm long, 1.0-2.5 mm wide and a weight of about 7g per 1000 grains. Regarding the chemical charisteristics, the processing and the use of millet, the same comments as for sorghum can be put forward, these two cereals are indeed very similar.

The shelling involves peeling away the grain of its envelope, the pericarp, and part of the germ. The pericarp is rich in indigestible cellulose fibers and it can contain bitter tannins (in the case of millet and sorghum) that inhibit the assimilation of nutrient substances and are the source of unpopular flavors.

The shelling is necessary for millet, sorghum and fonio, but it is optional for maize. It must be done prior to milling because, unlike wheat, the pericarps of these grains are brittle and can not be separated from the flour by sifting.

The germ, rich in fat, is a useful nutritional component, but it may limit shelf life (rancidity). It can thus still be necessary to degerm maize.

Manual shelling is still widely done by women, especially in rural areas, but mechanical methods have emerged and are now commonly used. Among these processes we discuss the sheller "Engelberg," which uses the principle of re-humidified grain friction, and the sheller "PRL-RIIC, which uses abrasive discs.

The dehulling step is thus decisive for the choice of a milling technique. Indeed the shelling is often accompanied with the moistening of the grain, which makes it difficult to use hammer mills, unless an intermediate drying step is added.