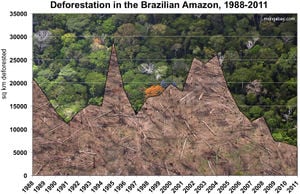 Rate of Amazonia Deforestation in Brazil. Image is from mongabay.com
Location data

The Amazon rainforests supply vital functions to biology, and also maintains crucial patterns in regional and global climate. The Amazon rain forests span across nine nations and cover around 5.1 million km2. These forests host about 25% of the world's terrestrial species, and accounts for about 15% of terrestrial photosynthesis,.[1]The Amazon forests influences the climate by being the engine for global atmospheric circulation through evaporation and condensation functions, and for millions of years have helped maintain and regulate atmospheric chemistry regionally and contribute globally to climate patterns.[2] But deforestation coupled with global warming may permanently alter the region and the functions performed. Without proper mitigation and responsible forest management, deforestation will continue, and critical stabilizing functions of the forest may be lost. Globally, more than 50% of the tropical rain forests of the world have been cut or converted to other land uses. Deforestation is contributing to climate change by reducing the amount of carbon able to be sunk out of the atmosphere, and through the increased CO2 and CH4 from the decomposition and burning of the forests. Currently deforestation worldwide comprises 25% of anthropogenic CO2 emissions, with the majority of the remaining percentage of emissions from burning fossil fuels. The Amazon rain forests have been under major threat. Major deforestation in the Amazon started in the 1970's, and since then has lost over 837,000 square kilometers of rain forest-- an area larger than the Gulf of Mexico, or about 84% the size of Texas, which represents a loss of 18.7% from its original span.[3] Deforestation rates has dropped significantly in the past few years due to the ability of the Brazilian government to regulate slash and burn practices, but the threat of continued deforestation looms as the global economy put pressure on the Countries' people to create short term profits and to maintain continuous economic growth.

The main reasons for deforestation in the Amazon include conversion to pasture lands for cattle, agriculture, and soybean farms. Other reasons include logging, hunting, and oil and mineral extraction. However, more than 70% of the Amazon deforestation is attributed to Brazil, and of this, 80% is for pastures conversion.[4]To put into perspective, the area of land devoted to crops in 1995-96 amounted to 5,608,000 hectares while the area for pasture conversion was 33,579,000 during the same years.[5]The reason Brazilians are converting these rain forests to pastures is because they have financial inventive to convert as much land as they can for beef export on the global market. Between 1990 and 2001, the European beef imports from Brazil rose from 40 to 74 percent.[6]Also, the devaluation of the Brazilian real against the dollar effectively doubled the price of beef in reals in 2001, creating an incentive for ranchers to expand into the forests. Brazil is now the largest beef exporter in the world, at the expense of its tropical rain forests and the geophysical functions they supply. 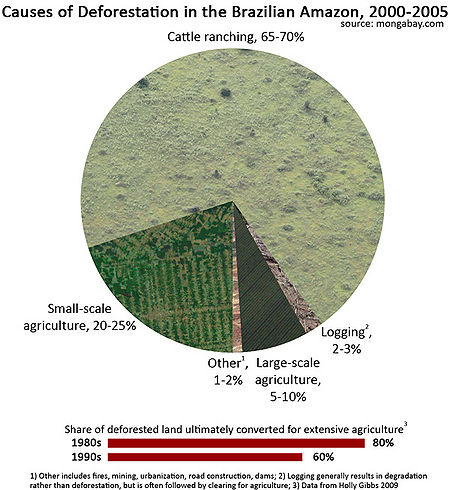 Reasons for Deforestation in the Amazon. Image is from mongabay.com

A contributing factor to the destruction of the rain forests includes the construction of roads. Cheap oil has created an incentive to construct roads to inland forest, and have allowed for heightened exploitation of the land. Cheap transportation due to low costs of fuel has made it economically feasible and profitable to convert forests to grazing land. It is estimated that construction of roads in the Amazon will lead to 140,000-270,000 km2 of additional deforestation, much of it occurring in fire prone areas.[7] Roads have led to fragmentation of the land, conversion of forests to pastures, and the creation of grasslands and dead woody fuel, all of which significantly increases the flammability of the region. Fragmentation of the land influences increased fire occurrence and severity because of the edge effect. New edges create more understory growth from increased light, and additional understory biomass provides fuel that allows pasture fires to spread into the forests. About 20,000 to 50,000 km2 of new forest edges are being created in Amazonia every year.[8]Additionally, as droughts increases in duration and frequency, forests will dry out to a greater extinct. Ignition from conversion practices will burn the forests, but will also increase the likelihood and intensity of additional fire to the region.[9]A tipping point may be reached when grasses can establish in the forest, providing a renewable source of fuel for repeated burns, creating a feedback loop of increasing fire. Not only does fragmentation increase the severity and frequency of fires, it also negatively impacts the flora and fauna of the region. A significant study in Belgium reveals that almost all forest plant species (85%) had extremely low success of colonizing spatially separated tracks of land, (Honnay 2002). Plant and animal populations in the Amazon will also experience high mortality rates as fragmentation continues. Without proper mitigation, such as safety corridors for species migration, fauna populations in fragmented forest will be detrimentally effected. Studies reveal two types of migrations that could occur on large scales due to global climate change. Some species could tend to migrate pole ward to find suitable conditions. Others may migrate "altitudinally", or up slopes of mountain ranges to compromise with changing conditions. As species begin to migrate pole ward or altitudinally, they will experience low survival rate with increase forest fragmentation without proper mitigation.[10]The threat of deforestation and fire damage to the Amazon is serious-- The removal of 30 to 40% of the forest could push much of Amazonia into a permanently drier climate regime, which would change the distribution of wildlife, as well as alter the irreplaceable climate and geophysical functions Amazonia serve.[11]

The Amazon forests have many contributions to the climate and biology regionally and globally. Terrestrial forests are major carbon sinks that act to sequester carbon in the atmosphere, and currently the Amazon sinks about ~0.6 billion tons carbon per year, (Baker 2004). Conversely, CO2 is emitted into the atmosphere when forests are cut; therefore deforestation itself is a positive feedback to global climate change. Aside from CO2, these forests also serve to transfer water from the soil to the atmosphere through transpiration. 25-50% of rain is recycled in these forests, and consequently large deforestation will cause a reduction in rainfall in the region, (Roy 2002). On top of this, deforestation may strongly affect dry season rainfall, which is a critical component in forming vegetation patterns, (Malhi 2008). As deforestation changes the atmospheric concentration of CO2 in the atmosphere, many effects are being observed. Deforestation will decrease cloudiness, increase land surface reflectance, change regional atmosphere from clean to smoky and dusty (which can modify rainfall patterns), and changes in surface roughness, which alter wind speeds.[12]

Fires in the Amazon are becoming more frequent with climate change, and with forest fragmentation

We are observing major and rapid changes to our atmosphere and climate. In the past 1.5 million years, the climate had not reached beyond 300 ppm of CO2. Within the past hundred years however, the concentration of CO2 in the atmosphere has increased by almost 100 ppm, to its current level of 388 ppm. The main reason for increased CO2 in the atmosphere is because of the extensive burning of fossil fuels and rapid deforestation since the Industrial Revolution (Hansis 2007). This is an alarming fact considering the implications of rapid sea level rise and changes weather systems worldwide. At the end of the last glacial period, Amazonia was warming at only ~0.1°C per century. In recent decades however, the rate of warming in Amazon rain forest has increased dramatically to around 0.25°C per decade. (Soares 2003). Temperatures are projected to rise 3.3°C this century, or by up to 8°C if substantial forest dieback affects regional biophysical properties (IPCC 2007). The main result of this warming climate will undoubtedly be increased drought and fire. Specifically, it is projected that eastern Amazon will be the most susceptible to increased temperature and decreased rainfall. Western Amazonia on the other hand is likely to see increased rainfall, (IPCC 2007). These models do not include the likely possibility that increased temperatures will affect evapotranspiration, which would have a positive feedback on drying out the entire Amazonia region to some extent. Other effects of climate change on the region include increased frequency and intensity of droughts, extreme storms, flooding events, and change in species distribution, including age, range, and migration patterns Degradation of ecosystem services could push some sub-regions into a permanently drier climate and greatly weaken the resilience of the entire region to possible large-scale drought driven by Sea Surface Temperature changes, (Malhi 2008).

With rapid climate change coupled with deforestation, careful and effective management tools must be implemented to save the geophysical and biological functions the Amazon serves. Suggested mitigation and conservation actions include: Keeping the total extent of deforestation below possible climatic threshold values (about 30 to 40% cleared), to reduce threat of a permanently drier region, having large protected areas with limited fragmentation, limited fragmentation, managed landscapes that maintain sufficient forest cover and landscape connectivity to preserve species migration corridors and forest transpiration services, controlling fire use through both education and regulation, maintaining broad species migration corridors in areas that are most likely to show early signals of climate impacts, such as those between forest and savanna, and conserving river corridors because they act as humid refuge and serves as migration corridors for terrestrial ecosystems and refuge for aquatic systems (Malhi 2008). Keeping the northwest Amazon largely intact is also important because it is the least vulnerable area in the region to climatic drying, and can act as refuge for migrating species. Northwestern Amazonia is protected by its remoteness and wetness, but this region is still vulnerable to hydrocarbon exploration and oil-palm plantations. The northwestern Amazon region is shared between Brazil, Peru, and Columbia, complicating the responsibility of regulating of the region, a comprehensive plan among these nations needs to be drafted in order to protect the land from further exploitation.

Financing a climate resilience plan for Amazonia has its difficulties. Reasons include the drive of globalizing market forces, such as beef, soybean industries, insufficient financial resources to implement protection management, lack of open access to information for poor, limited technical and governance capacity, governments are unwilling to bite bullet, huge costs to their countries, and ineffective enforcement of rule of law. One option for raising money for mitigation could come through a carbon-sequestering program. REDD (Reducing Emissions from Deforestation and Degradation) is a system proposed to offset carbon emissions. It was introduced after the Kyoto protocols, and many drafts have been proposed since then. It is an incentive to keep remaining forest in tact, and to properly manage forest stands through participation with a cap-and trade type program. Countries with significant forest stands could be eligible for carbon credits through sequestering carbon. They could then sell these carbon credits to polluting companies on an open market, and this could pay for further forest mitigation. Brazil should be the main participant because of the extent of deforestation they have committed, and should be encouraged to increase protective measures.