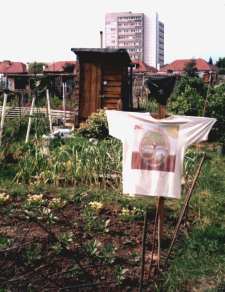 In the United Kingdom, an allotment is a small area of land, let out at a nominal yearly rent by local government or independent allotment associations, for individuals to grow their own food. This could be considered as an example of a community garden system for urban and to some extent rural folk.

The allotment system began in the 18th century: for example, a 1732 engraving of Birmingham, England shows the town encircled by allotments, some of which still exist to this day. Following the Inclosure Acts and the Commons Act of 1876 the land available for personal cultivation by the poor was greatly diminished. To fulfil the need for land allotment legislation was included. The law was first fully codified in the Small Holdings and Allotment Act of 1908, it was modified by the Allotments Act of 1922 and subsequent Allotments Acts up until 1950.

Under the acts a local government is required to maintain an "adequate provision" of land, usually a large allotment field which can then be subdivided into allotment gardens for individual residents at a low rent. The rent is set at what a person "may reasonably be expected to pay" (1950), in 1997 the average rent for a 10 rod (1 E1 m|50.29 metres) plot was £22 a year. Each plot cannot exceed 40 rods and must be used for the production of fruit or vegetables for consumption by the plotholder and their family (1922), the exact size and quality of the plots is not defined. The council has a duty to provide sufficient allotments to meet demand. The total income from allotments was £2.61 million and total expenditure was £8.44 million in 1997. 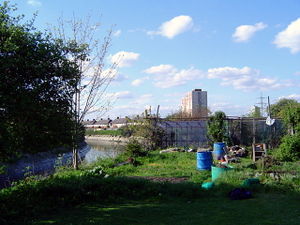 Allotments in the East End of London

The total number of plots has varied greatly over time. In the 19th and early 20th century, the allotment system supplied much of the fresh vegetables eaten by the poor. In 1873 there were 244,268 plots and by 1918 there were around 1,500,000 plots. While numbers fell in the 1920s and 1930s, following an increase to 1,400,000 during World War II there were still around 1,117,000 plots in 1948. This number has been in decline since then, falling to 600,000 by the late 1960s. The Thorpe Inquiry of 1969 investigated the decline and put the causes as the decline in available land, increasing prosperity and the growth of other leisure activities.

Allotment users have an organisation that campaigns on their behalf, the National Society of Allotment and Leisure Gardeners, known as the "NSALG".