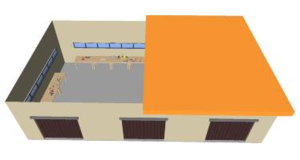 This article deals around the tools frequently used in AT factories or workshops. Not all tools are generally required; it depends on the exact nature of material/device created in the AT factory; this as not all materials/devices are made in each AT factory. Instead, each AT factory specialises to some degree, and needed materials/devices for particular AT villages can simply be transported there when required. This allows each village to attain every type of material/device it requires, while still allowing the AT factories to operate efficiently.

The use of tools, and the ability to make them using local resources and equipment, are certainly very important in any appropriate technology effort. In some areas where small blacksmith shops, foundries, woodworking or machine tool workshops exist, many of the tools and processes covered in these books may have been in use for many years. In other areas, most of these crafts and skills are unknown. Therefore, the tools found in this category are of many different types, from simple hand tools to wood-turning lathes to metalworking equipment. Some may be made at the village level, others may require metalworking shop facilities.

The following list standardises the tools frequently used to some degree, to ensure that as little as possible money/materials are used by incorporating different tools that can execute a same task.[1][2]

The "jigsaw" noted here is a regular jigsaw, and not a stabbing jigsaw. This is because this first type is more accurate to work with and more safe, also conductance can be placed on the tool. The safety issue is also the reason whythe portable circular saw was eliminated from the list. Although it is possible with both devices to immediatelly start cutting on any point of a plate or metal object (without having an opening), the device can get off the plate and potentially wound a person; at least if no clamp is foreseen. Instead, we will opt to make an opening by means of the hand drill, then insert the jigsaw blade and start cutting.

The nibbler has been kept in the list, despite that the job could also be done by means of the jigsaw. A nibbler (which can however only be used on metal sheets/objects), has no saw blades and does not wear easily. It will also work faster. These 2 issues make it economical/appropriate to still include it into the list, despite that the jigsaw can be used to also perform the work of the nibbler.

Locations of AT factories[edit | edit source]