Mu7afazat 3al Bey2a, which focuses on the environment, is 7iberINC's most well-known project to date. Volunteers have trained young people across the country to use social media tools such as Twitter and Facebook in order to inspire social change relating to the environment. One example of student work resulting from Mu7afazat 3al Bey2a was described by Treehugger.[2]

"Participants... have used their cell-phone cameras to film the garbage piled up in vegetable market and evidence of environmental violations at construction sites. They have mapped the country's nature and wildlife reserves to raise awareness about the need to protect them, and hailed the hard work of municipal sanitation employees."

Organizers hope that the project will inform people around Jordan and the world of important environmental issues that need to be faced. 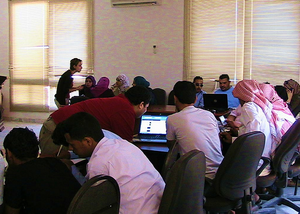 7iberINC is currently working on a joint project with International Medical Corps. Hayatouna Al Yawm's objective is to teach Iraqi refugees in Jordan "on how to use various tools, such as a digital camera and a recorder, to create compelling stories about the lives they lead and the environments they reside in."[3] As of March 2011, they expect to train more than 70 young refugees.

7iberINC also teaches people about the benefits of live-blogging events such as elections. When the Jordanian government went through restructuring in 2009, 7iber encouraged citizens to blog and post in forums about it.[4]

Currently, 7iber works on a project called #HashtagDebates, which allows people worldwide to debate important issues on Twitter. Website Curated.by puts the post in one forum and translates them into languages that every participant can read..[5] "The # Debates seek to bridge the gap between the online and offline worlds, by creating an opportunity for a community of Jordanians with a genuine interest in debating and discussing vital national and regional issues," said website Makanhouse.net.[6] The video below is from a training workshop at Zenid where participants learned to live-blog the World Economic Forum.