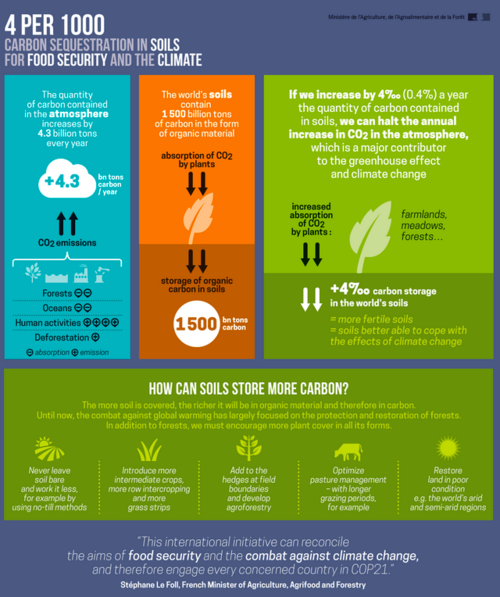 4/1000 Initiative: Soils for Food Security and Climate is an initiative put forward by France during the negotiations for the Paris Agreement in 2015.[1] The "4‰ Initiative" (as it is known for short) is an attempt to bring together willing contributors from both the private and public sectors to show that agriculture and the use/care of agricultural soils are crucial in food security and climate change.[1]

The 4‰ Initiative is aiming to show that a small increase of 4/1000 per year of the soil carbon stock will improve soil fertility as well as keeping the global average temperature increase below 2 degrees. It is also aimed at increasing the resilience of farmers and farming communities, through sustainable soil management that creates jobs, generates incomes and promotes sustainable development.[1]

The soils focused on by the Initiative include agricultural soils (pastures and grasslands) and forest soils.

The methods to be used include:[1]

Partners in the Initiative[edit | edit source]

The stakeholders make a commitment to undertake voluntary action together to use farming practices that "maintain or enhance soil carbon stock on as many agricultural soils as possible and to preserve carbon-rich soils".[1]

Those who are already in the Initiative include: