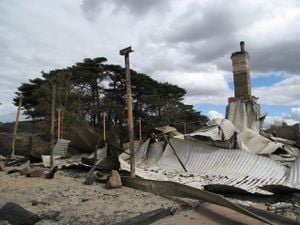 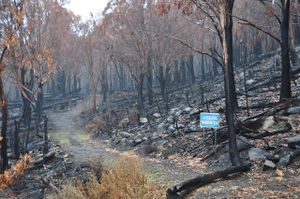 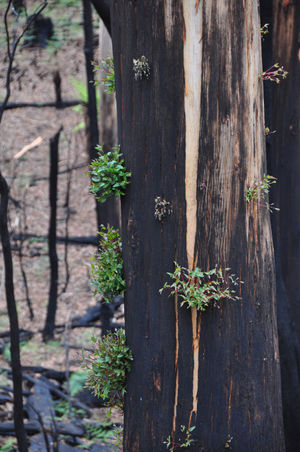 Forest regenerating along the Acheron Way

The 2009 Victorian bushfires on Saturday 7 February 2009 were the worst bushfires in Australia's history, surpassing both the Ash Wednesday fires in 1983 and the Black Friday fires in 1939.

The bushfires travelled at alarming speed, up to 100km/h, across farmland and through plantations and heavily "managed" forests, including forests where recent fuel reduction burns had been done.

Bushfire and climate scientists have confirmed that Victoria's hottest day ever, combined with very strong north winds, created conditions for an unstoppable firestorm.

Initial track of the fires that started at Kilmore East and Murrindindi Mill.

Note: this map is not accurate

Note that the fire fronts changed direction to travel North East after the southerly wind change. This wind change created a huge fire front along the entire edges of the previous fire track, and resulted in Flowerdale being burnt.

The bushfires slowed considerably when they eventually entered Melbourne's water catchments, but they continued to burn. Intact wet sclerophyll forests in our water catchments are less prone to burning, and temperatures and wind speeds have eased.

Chronology of the fires[edit | edit source] 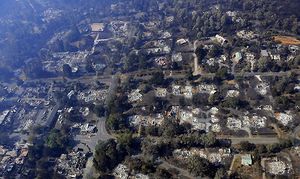 Marysville after the bushfire

The fires came as Melbourne reached its hottest ever temperature of 46.4 degrees.[1]

The extremely hot temperatures were accompanied by very strong north westerly winds, which changed to strong south easterly winds in the late afternoon.

The combination of extreme heat and very strong winds resulted in the highest ever fire danger index warnings recorded in Australia.[2]

The fire danger index scale ranges from 0 to 100, with 100 being extreme fire danger. During Saturday 7 February, index warnings above 150 across Victoria were advised, with some areas exceeding 200. 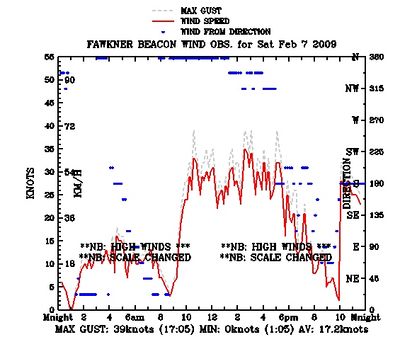 Professor David Karoly has stated that the extreme weather parameters on and leading up to February 7 were the most important factor, including:

The strong north winds and the southerly wind change on February 7th were not unusual in themselves, but combined with the above factors, and ignition of the fires, the results were catastrophic.

Professor Karoly also pointed out that CSIRO scientific predictions are that the current rate of climate change were are experiencing will result in 4 times as many extreme fire dangers days like Black Saturday each year by 2050.

He concluded with these observations: 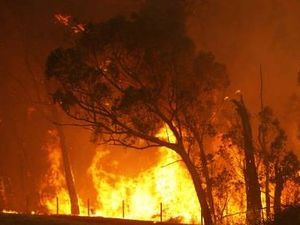 Millions of tonnes of carbon have been released to the atmosphere. Australia's total emissions per year are around 330m tonnes of CO2. Previous research has shown that the bush fires in 2003 and 2006-07 had put up to 105m tonnes of carbon dioxide into the atmosphere because they burned up land carrying 50 to 80 tonnes of carbon per hectare. This time, however, the forests being destroyed are even more carbon-rich, with more than 100 tonnes of above-ground carbon per hectare. The affected area is more than twice the size of London and takes in more than 20 towns north of Melbourne, so the CO2 emissions from this year's disaster could be far larger than previous fires.[5]

Water collection in dams affected by Victoria's bushfires could fall by 30 per cent in the decades ahead, Melbourne Water officials have warned. Three of Melbourne's four most important reservoirs have had fires in their catchments during the past 10 days, with two of the catchments suffering significant damage. [6]

The following power lines which supply Melbourne with electricity failed during the bushfires:

An electricity spokesperson stated on the Radio 774 on February 7 that Melbourne was very close to losing its power as a result of these fires. If another power line had been impacted the entire grid would have been temporarily shut down.

Phone networks failed in fire areas when the following infrastructure was destroyed by fire:

After the fires, there has been much speculation about measures that could be adopted to reduce bushfire risks and impacts. A Royal Commission with a wide terms of reference has been announced by the Victorian Government to investigate these bushfires and make recommendations.

Some possible measures that may reduce bushfire risks and impacts include:

New building regulations to improve the fire resistant qualities of building such as: 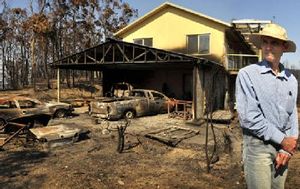 Despite being attacked twice by fire on Black Saturday from two different directions Mr Williams' Steels Creek home stood solid while everything around it was destroyed. Four of his neighbours died.

The fire that bore down on his house was about 1200 degrees, hot enough to soften the metal but not melt it. Glass doors and windows in his house are all double-glazed. Some of the outside panes cracked in the heat. Next time he'll add shutters

Features of the Steels Creek house that assisted its survival:

Fire scientist Dr Kevin Tolhurst stated at a seminar on 21 April 2009 that:

Kevin stated that the extreme weather dominated the fire behaviour rather than fuel loads which played a lesser role. As an example, he mentioned the Lara bushfire on grass paddocks on 8 January 1969 along the Geelong Road that killed 17 people trapped in their cars. In total, 280 fires broke out on the 8th of January 1969. Of these, 12 grass fires reached major proportions and burnt 250,000 hectares. The fires also destroyed 230 houses, 21 other buildings and more than 12,000 stock.[3]

The scale and speed of the bushfires placed extremely high demands on emergency communications, including:

Distributed and asynchronous communications technologies could be more effective for handling the large volume of messages and information that needs to be shared in these type of emergencies. Options include:

The Royal Commission will investigate these matters further. 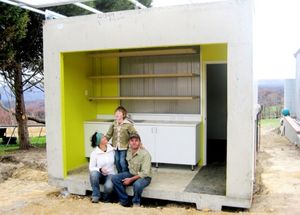 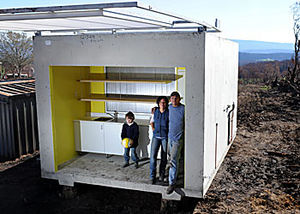 The House re-Growth Pod has been designed by architect who wanted to help with the re-building process of fire destroyed homes in Victoria. The dwelling is a completely self contained concrete service pod which is s a permanent and cost effective housing unit which can assist in the rebuilding of the fire devastated town-ships of Victoria.

The robust pre-fabricated concrete structure has been designed to be built upon, but in the short term acts as a habitable starting point for the building of a new home. The units can be prefabricated, delivered and connected to services rapidly allowing families to begin the process of re-building without displacement from their communities[9][10]

The Royal Commission's terms of reference were released on Monday 16 February 2009 and include inquiring into and reporting on the following matters:

Recommendations arising out the inquiry are indicated on: