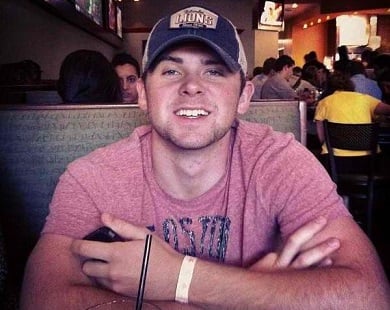 My name is Tyler Beauchamp and I am a 4th year Electrical Engineering student at Michigan Tech University and a member of the Open Source Hardware Enterprise. My current and past projects are below.

Induction Furnace- Our main issue is the safety measures; specifically the crucible break detection (CBD) which is a requirement of the foundry at MTU. We believe it is due to the Electric field created by the coil and are now trying to avoid it with software. So the good sign is that the CBD does work and shut off when it is shorted out, but we only want it to turn off the system when molten metal shorts it out.

Solar Roofing Rack- The Roofing System is going smoothly; the data logging system has been tracking data for a few months now. The only set back is the power data from the KRC has been malfunct for an unknown amount of time. I am currently working on the paper for this project including: schematics, graphs, CAD drawings, and commentary.

Solar Panel Heating- (12/13/15) Update- The heaters from Van Straten have been put up and plugged in and should be good to go with some minor calibration. My heaters will be up shortly. To Do still: is to creating of the schematics, and analyzing data once the winter is over.

Looking forward to Spring 2016 Semster Next semester I would like to enhance the efficiency of my solar panel heating system along with the writing of these 2 papers. I also plan to get the induction furnace up and running ASAP so that it can be put to use.

During the summer of 2015 I worked with Patrick Rice on the Induction Furnace with abilities of melting steel and aluminum. Mainly this summer we did construction and assembly of system parts along with low voltage tests. At the current date (8/18/2015) we are nearing completion with the water pump installation being the last thing on our list.

I also became involved with producing a data logging system that will measure and store temperature and moisture levels underneath solar panels. More to come.

This semester I worked on an open source laser cutter/etcher know as the Lasersaur. All of the documents on setting up the lasersaur's hardware and software can be found at their website. Our goal with the Lasersaur in the Open Source Hardware Enterprise is to have a functioning laser cutter available to other enterprises, senior design teams, and students who are building something. It was left off from last semester as a frame with motor and carts attached. Our version of the Lasersaur was a little from each Build of Materials (BOM) version 12.11 and up; the reason for this being it was not our original project. The main difficulties we ran into were the parts, because some were lost in translation that had days to weeks order time.

Completed Spring '15 Semester
Being an electrical engineer my task was to wire and cofigure the system including: the X and Y axis motors, limit, door, emergency stop switches, the laser, exhaust, air assist, and water chiller.

The Lasersaur uses a driverboard to interface with all of these inputs and outputs and uses screw terminals mainly for voltage supplies along with cat5e terminals for signaling of motors, switches, and air assist by way of software. Inputs/Outputs that were also wired include the 120 volt power supply (PSU), 24 volt PSU, 5 volt PSU, along with cat5e patch cable for the rest of the electrical components.

Attached to the driverboard allowing us to interface with the system is a Beaglebone which has an Ubuntu version developed by the Lasersaur group that allows the user to upload cuts to the driverboard, and test the system performance. The beaglebone has the capability of being wirelessly connected to the users computer allowing easy uploads for new cuts.

Beginning of Semester after some wiring done: 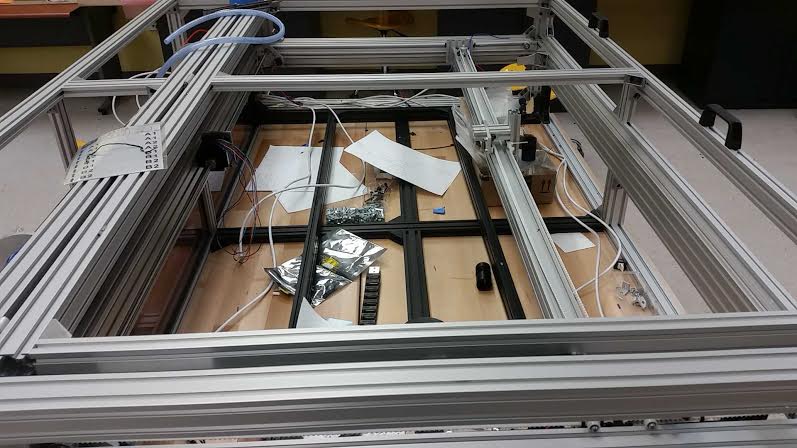 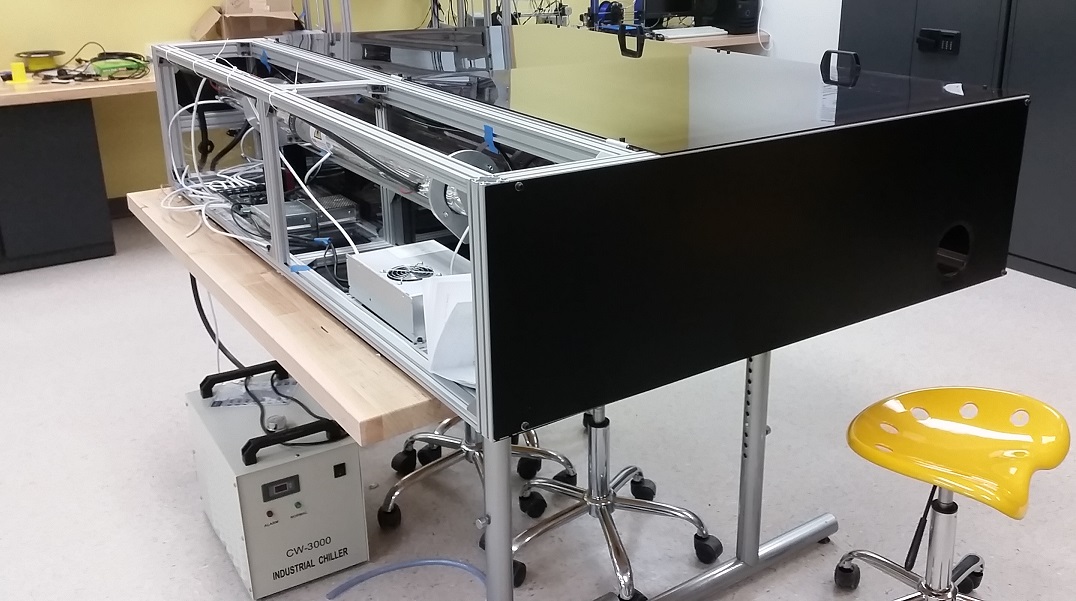 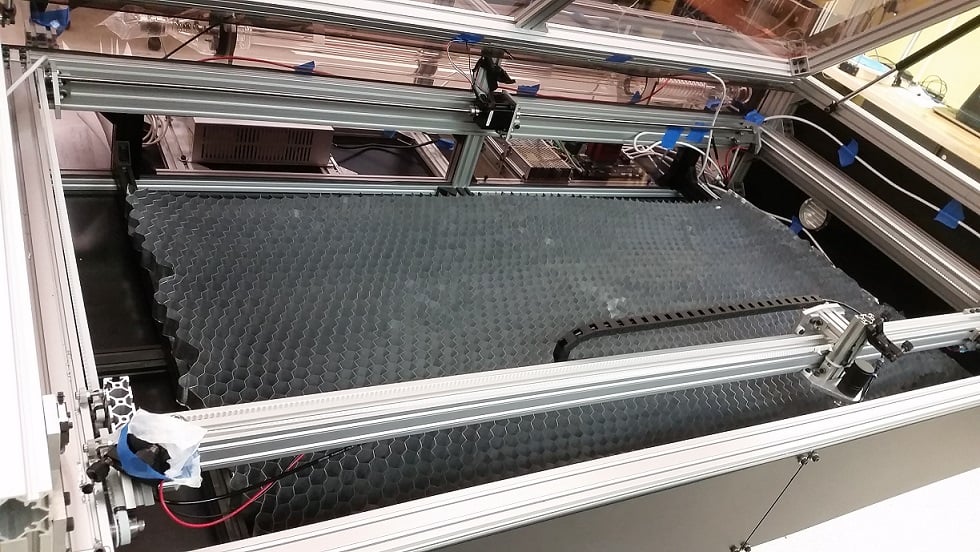 Note: The blue painters tape and zip ties are a temporary hold for the wires and will be replaced with 3D printed clips or glued to their permanent location once the system is up and running. There are also panels on the side and top to cover the laser and electronics.


What's Left
To this date (4/20/2015) the Lasersaur is at 85% completion; every component is wired any ready to go. Currently the only issue is with the Beaglebone mircrocontroller and is our only set back to actually turning on the system. A nitrogen tank or air compressor used for "air assist" is also needed because of charred pieces and fumes created when cutting different materials. There is also air tubing placed at each mirror and lens in attempt to blow away dust particles to increase longevity of these pieces. If the dust were to ignite due to the laser it would surely cause that lens or mirror to be damaged. The nitrogen tank/air compressor will not be needed right away until we ensure that; all carts move correctly, all limit switches are placed correctly and we actually turn the laser on. Once the Beaglebone is setup and working with the driverboard troubleshooting the system will be the only thing left in order to complete the project.

Modification
There was no modification to the Lasersaur because of the electronics and class 4 laser complexity that could potentially render the system useless or seriously increase the build time. That being said; modifications could be included after the system is running that will facilitate a better laser cutter, be it software or hardware.

I also helped at the beginning of this semester with the initial build of the i3 until I started working on the lasersaur.