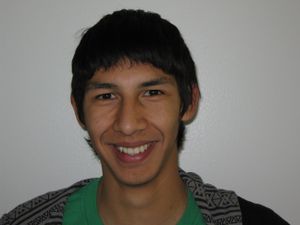 me before Engr115 lab xD

I was raised in Guatemala until the age of 13, later, I moved to Los Angeles (LA). There I attended Los Angeles Senior High (LAHS) and ran cross country with the school.

During my senior year I join a club called MESA (Math, Engineering, and Science Achievement) where me and many more students worked on projects based on physics and math to compete against other schools. Some of the projects included: bridges, mouse trap cars, windmills, catapults, and many more. This club was the reason why today I am interested in Engineering.

Coming from LA I was raised naive for any Eco-friendly products, actually I had no idea such things existed. When I chose HSU I was only thinking about the size of the school and its surroundings. Here I came to learn about Environmental Engineering and how our world is so clueless about all the actions they doing that are destroying the our home, the earth. Since then I've been learning on ways how to advocate for a more greener life and help our mother earth survive.