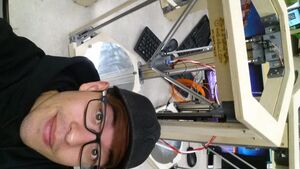 Ricardo "Ricky" Reyes is an undergraduate student pursing an Electrical Engineering Degree at Michigan Technological University. His primary focus throughout his educational career had been within the control systems engineering field, and also a minor focus within computer science and programming. Outside of school, he had two student internships with HGST: A Western Digital Company where he learned more about the computer storage industry, along with the development and testing involved with HDD's and SSD's.

In the Fall of 2016, Ricardo enrolled within EE4777, the electrical engineering portion of the Open Source 3D printing course offered at Michigan Tech. There he assembled a Rep Rep 3D printer, and begun his educational career working with open source 3D printing. The development of his Appropedia profile is attributed this course.