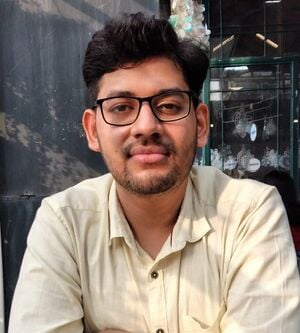 Sagnik is currently pursuing a Masters degree in Mechanical Engineering from Michigan Technological University in the MEEM (Mechanical Engineering - Engineering Mechanics) department, and he wishes to specialize in Renewable Energy. He has avid interest in Thermodynamics and in the field of HVACR (Heating, Ventilation, Air-Conditioning & Refrigeration). He previously used to be associated as a student member with ISHRAE (Indian Society of Heating, Refrigerating and Air-Conditioning Engineers) during his Undergraduate studies in India. His research interest areas include refrigeration, air-conditioning, energy systems and alternative energy. Sagnik is fluent in English, Bengali and Hindi, and also knows very basic beginner’s level German. Outside of academics, he has a very keen liking towards football (soccer) and is a passionate supporter of Manchester United Football Club.
User data

Hello, my name is Sagnik and I am currently a Graduate Student in the MEEM (Mechanical Engineering – Engineering Mechanics) department at Michigan Technological University, looking to specialize in Renewable Energy. I hail from Kolkata, India, and that was where I have done my Bachelors (undergraduate) studies. My minor was also Mechanical Engineering and my capstone project involved construction of a small-scale, domestic, decentralized biogas reactor.

After my Undergrad, I worked for a brief while as a Marketing dept. GET (Graduate Engineer Trainee) at Paharpur Cooling Towers Ltd, the biggest cooling tower manufacturing firm in India.

I have also worked for Make-a-Wish India.