From Appropedia
< User:Jthiller
This is a project in progress, feel free to make changes to the page or give me your feedback in the Discussion tab.

You can put an abstract here.

The goal of this project is to build an electric car at a relatively low [American] cost. Typically electric cars are sold to the public at prices ranging from roughly $40,000[1] to $109,000[2]. This leaves many people unable to afford these new, more energy efficient vehicles, and are left to cope with a wild petroleum market.

However, with a little time and at an affordable cost, an electric car can be built that is capable of fulfilling most daily commutes or errands.

Since this is a project on a tight budget, not a lot of priority is given to getting 'just the right part'. Most parts were obtained by prowling eBay and searching locally. Retail store purchases were avoided when possible with the intention of saving money. 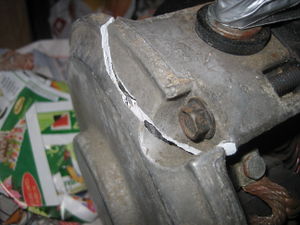 Shipping damage on the 24V motor.

The first motor purchased was a 24 volt Advanced DC Motors that was apparently pulled from a scissor lift. I probably jumped too quick on buying it, as 24 volts isn't much more than go-cart power. At 24 volts and pulling 400 Amps, the motor would be putting out less than 13 horsepower. To top things off, the motor was badly damaged in shipping. By making some modifications to the motor, I was able to salvage it. However, these modifications necessitated the purchase of a $20 drill bit.

I was able to find another motor, 97 volts, that was roughly the same price. However, the shipping cost on this second motor was $50 more. This second motor will be the one used in the car. The time and cost associated with making a mounting plate are too great to start with an underpowered motor.

The motor controller that will be used initially for this project is the Curtis 36V, 400A DC controller. This will allow for getting things figured out and will allow me to get the car moving without spending lots of time and money on batteries.

After everything is set up with this controller, it shouldn't be too hard to switch over to a larger controller and add more batteries. 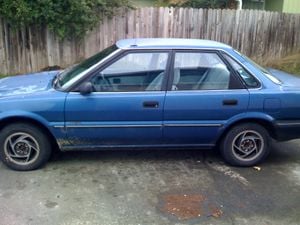 Through watching Craigslist for a couple of weeks, I found a 1980 Geo Prism for sale in a nearby town. The seller was asking $500 in the original post, the car had a broken radiator and a cracked head. Since an extended time went by with no interest, the seller agreed to donate the car to the cause. Now, all that needed to be done was to get the car from McKinleyville to Fortuna, where the work would be done. Easier said than done apparently. To keep a long story short, a couple of days were spent trying to find a way to get the car moved. In the end, I ended up using a tow dolly from U-Haul. The move took a couple of hours. Since the car didn't run, it had to be pushed around the driveway with tires that were nearly flat. It was quite a work-out.

The scooter throttle that I bought off of eBay failed to show any resistance variation when I had it plugged into my multimeter. This led me to believe that it was a 'Hall Effect' throttle and not a potentiometer one. I picked up a 5k Ohm linear potentiometer (As opposed to logarithmic) at RadioShack for a little over $3. This should work well enough in the testing phases. I might even be able to use it in the final design somehow. 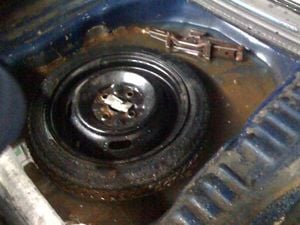 The trunk was full of gunk.

The trunk was wet. Very wet. 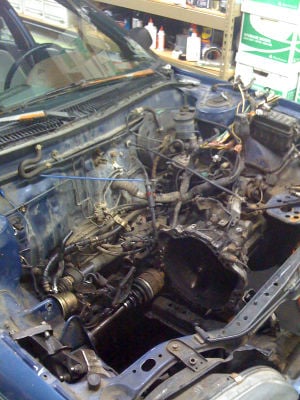 This part was rather fun, though at times tedious.

Not having a jack to remove the motor was something of an obstacle. However, after watching some videos on Gav's KiwiEV.com I decided to remove the motor part by part. I was able to work all down to the engine block before things started to get very difficult. Luckily, I found out that one of my parent's neighbors builds race cars. I showed him the project and he let me use his engine hoist.

This table breaks down all of the costs related directly to the project.

Auxiliary costs such as food, electricity, travel, etcetera are not included.

All values are given in Dollars (US).

For the most part, I was able to buy most things off of eBay for fairly good prices. Shipping prices on motors can be outrageous. I was lucky with my purchase as the shipping charge was $25 for me, yet the seller ended up having to fork out $69 at the post office. For someone willing to wait, these items would probably pop up in a scrap yard at some time or another.

I was lucky enough to end up with a car that was in fairly good shape, but it still had its issues.

When doing a project like this where the car is the central object, it is worth it to really make sure you've got something solid. The car I worked with was old and abused. While this is perfect for the recycling aspect, it makes work rather difficult. Missing seals on the doors, busted bumpers, half of a grille (which doubles as support for the headlights) are just some of the things that I encountered with this car.

Affect on other industries[edit | edit source]