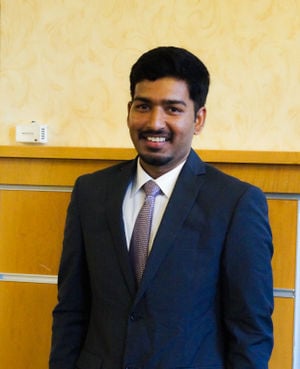 'Be the change what you want to see in this world'

I am a master's student at Michigan Technological University, pursuing graduate coursework under the Electrical and Computer Engineering department. I will be specializing in power systems and renewable energy technologies and am expecting to graduate by Summer 2018. The courses at Tech under eminent professors - Prof. Joshua Pearce, Prof. Bruce Mork, Prof. Sumit Paudyal and Prof. Anand Kulkarni have created a solid foundation in the line of Power Systems and Renewable Technologies. My life ambition of making this world a better place to live in has deeply influenced my career choices and hence I am a strong advocate for the use of renewable energies over conventional sources of energy. I hail from Chennai, India; Completed my Bachelor's in Engineering under the Electrical and Electronics Engineering department. I have actively participated in many national technical symposiums and presented various technical papers. I have excelled at technical quizzing events and won various accolades. I delegated at the the International Renewable Energy Conference, Chennai, conducted by the Energy Alternatives India where I presented a report on the role of corporate organizations toward a greener India 2025 to the representatives from the solar industry.

I have a two year professional working experience under Tata Consultancy Services (TCS), where I developed Mainframe programs for the banking and financial services, especially for the credit cards. I have been commended on my work ethic and won an award for my dedication towards project development and deployment as my team won the best Team award at TCS. Prior to working with TCS, I worked with Focus Academy for Career Enhancement where I traveled around India, training junior and senior students in quantitative and logical reasoning problems and helped them with their personality development. I was awarded the best Intern based on the feedback received from the students regarding the efficient training methods deployed.

Volunteering with Blue-Cross, I was a part of various adoption drives and rescue efforts to ensure the safety and welfare of animals. As a Volunteer with Bhumi, a Non Governmental organisation, I was able to educate underprivileged children. Later as Bhumi branched out its activities to improve the environment, I was made the green Champion where I help setup the 'Think Green' project. As a part of this, we collaborated with corporate companies and educational institutions and discussed the roles they could play in shaping a better environment. Various lake and beach clean-up drives were organized across the city which amassed hundreds of eager volunteers. These volunteering experiences have helped to immensely contribute back to the society.

I am an avid sports fan, audiophile, bibliophile, computer gamer, conversationalist and hence I will never run out of topics to talk about!