The article mentions ancient Egypt. How did heliostats work in the days before clockwork and motors? --Chriswaterguy 17:18, 8 July 2010 (UTC)

Like I said on the main page, the mirrors were aimed by hand. Basically, the "machine" consisted just of something like an easel, on which the mirror could be placed. At frequent intervals, a person - a servant or slave - would shift the easel and mirror so it continued to reflect light in through the door of the building, or whatever.

At least, that's how they still do it nowadays, to show tourists. I've been to Egypt a couple of times and seen them doing it. I assume they are using the same method as was used in ancient times. Generally, the ancients documented things well with hieroglyphic descriptions, so the methods they used are still known with relative certainty.

Thanks - wondered if it was that but I wasn't quite clear.

It's an interesting pattern, looking back in history - the very wealthy and privileged used to rely on masses of labor (servants or slaves). Even simple labor-saving devices such as wheelbarrows were not used. The Roman and Greek civilizations were surprisingly close to an industrial revolution. One major factor holding them back was that they had slaves - it was only when such labor was unavailable that there was a real impetus to develop technologies to do work. --Chriswaterguy 00:34, 21 July 2010 (UTC)

In at least a few cases, the slaves have developed the technology to put an end to their own slavery. I'm thinking of what happened in about the 18th Century, in England. Water was pumped out of mines by primitive steam engines, invented by Newcomen (?sp). Children were employed (essentially enslaved) to turn valves to send steam into and out of the cylinders. One kid, I don't know his name, managed to tie bits of string to the valves and other parts of the engine, so the engine turned its own valves and the kid could relax. However, this had the unintended effect of making the engine work a lot better. The timing was improved. The owners of the mine noticed that the pump was working better than it used to, so they investigated. Finding that the kid was now redundant, they threw him out onto the street. As a slave, he had been fed. Now he had nothing.

A further thought: Western science and technology were essentially stalled until the 15th Century because of the horribly cumbersome numerical representations that were used. Can you imagine calculating the area of a circle, using Roman numerals?! Only after "Arabic" numerals were introduced into Europe in the late 1400s could calculations be done accurately and easily. This led quite rapidly to the development of science in the 16th and 17th Centuries, and to the start of the Industrial Revolution in the 18th Century. The 18th Century was also when the slave trade was at its peak, which makes me doubt whether the absence of slaves causes technology to be developed. DOwenWilliams 14:09, 21 July 2010 (UTC) David Williams 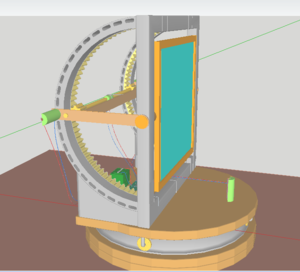 This image was put into the heliostat page today without any explanation. Honestly, I can't figure out what it is, what it does, or how it works. So I have removed it from the page. If someone wants to put it back, with an appropriate explanation, please do so! DOwenWilliams 07:25, 10 June 2011 (PDT) David Williams

I think I've now figured out that the image shows a simple heliostat (with a strange blue-green mirror) that is intended to be operated by hand. I wonder what the ancient Egyptians would have thought of it. They moved heliostat mirrors by hand, but they certainly didn't need anything as complicated as this device. It appears to have some sort of protractor for setting the angle of elevation of the aim direction of the mirror. I bet the Egyptians never calculated any angles, nor used any protractors! DOwenWilliams 18:41, 17 June 2011 (PDT) David Williams