From Appropedia
< AT CAD TeamRedirected from Solar Updraft Tower 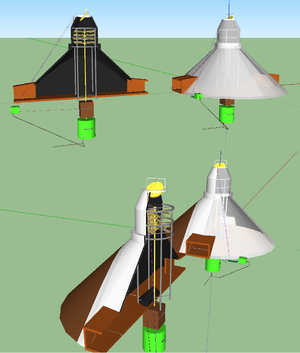 3D model of the AT solar updraft tower

This article is about the construction of a solar updraft tower. A solar updraft tower is a renewable-energy power plant which combines three old and proven technologies: the chimney effect, the greenhouse effect and the wind turbine. Air is heated by sunshine and contained in a very large greenhouse-like structure around the base of a tall chimney, and the resulting convection causes air to rise up the updraft tower. This airflow drives turbines, which produce electricity.

An obvious question to ask is why the solar updraft tower is useful, since we already have a AT solar power tower. The answer is simple: this design is much cheaper to built and the efficiency may be better (definitely so if the energy needs to be converted to electricity anyway). Also, in some cases, it would be possible to convert existing greenhouses to a electricity production plant. The higher efficiency of this plant can be simply explained: the AT solar power tower either uses a stirling engine or a steam engine to convert the gathered thermal energy from the sun to electricity. This component only reaches a efficiency of 40% or even but 15% (see Comparison_of_engines). This design converts the mechanical energy directly to electricity instead, meaning that the energy losses would be far lower.

There are disadvantages too. Ie since the tower does not heat any water as a working fluid, no heated water is produced that can be used for other purposes (see https://www.appropedia.org/File:Semi-buried_dwellings.JPG ). Another disadvantage is that the tower will pretty much lose power and cease to operate the minute the sun is gone. This too is an issue with the AT solar power tower design, however to a less degree; this as the heated water will not immediatelly lose all of its heat, meaning that it can still operate a little while longer after the sun is gone.