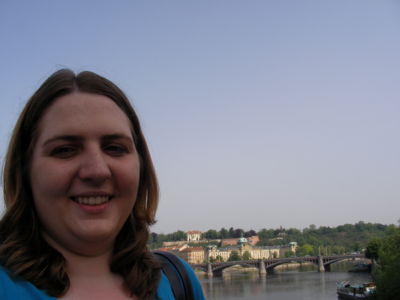 Hi all! Well as you can see my name is Teresa Garrison. I grew up in the Pittsburgh area. I have always had a passion for the arts, whether I was good at them or not. When I was younger I had decided that I wanted to become an artist. That dream did not go very far because the best thing that I could draw was a stick figure. After that phase of my life I decided that I wanted to concentrate on a passion that I have had most of my life: singing.

I started taking voice lessons and getting more involved in my high school choirs. I had really found something that I loved and that I was pretty good at. At the same time I joined an organization that tried to help teens. It is called STOP (Students Together Organizing Prevention). This program put on short skits for teens that showed a real life issue that students could possibly go through. It also showed different ways that students could get help, and how to understand the different problems that students go through. Some of the topics that were covered were cutting, stress, depression,drugs, alcohol, and sexual harassment. This was to show students that they were not alone when facing these types of problems and that there was a way to get help.

After my first year of voice lessons I was encouraged to audition for musicals and plays. I went to a local theater and auditioned to be in the musical Footloose. I was one of the lucky few that was selected to be in the ensemble. Later in the year I was cast in a play that was put on by my high school's drama department. Not only did I have a part in the show, but I also was in charge of the sets and costumes that the students would wear. During the same time my classmates in my drama class decided that they wanted me to be the director of our drama class play. It was an honor and the first of my directing career. The next year I auditioned for a role in the musical Grease. I was again selected. My role in this play was a member of the Glee Club. The next year I auditioned for a part in Seussical The Musical. I was selected to be one of the Bird Girls who help to narrate the show. It was an honor. The next show that I participated in was the play, The Hunchback of Notre Dame. I played the Mother Superior.

After my first year of college I was given the opportunity to travel overseas with a group of people. I decided to grab the opportunity by the horns. My brother and I both got to attend the trip to Germany, Austria, Hungary, Czech Republic, and Slovakia. It was a life changing experience that I will never soon forget.

After college I would love to become a teacher. Educating the future generations would be an honor. I would also like to continue singing and acting. There are so many more places to see in this world and so much more for me to learn. I cannot wait to see what is in store for me.

What I want to learn about the Environment[edit | edit source]

As a person who will hopefully be living on this earth for many years to come I would like to learn about things that I can do in my home or neighborhood that would make a difference to the world.