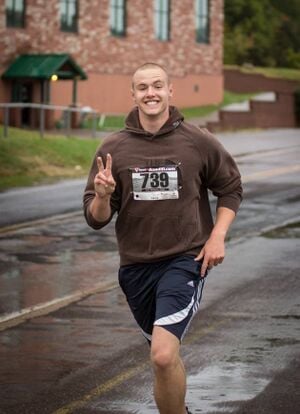 I've been 1337h4x0ring since I was a wee child. I started out programming my Ti-83 to cheat on math/science exams back in middle school and have been cheating (and sometimes programming) ever since!

I started learning FORTRAN (that was a mistake) and moved to C/C++, and I mostly messed around with terminal games (RPGs, pong, asteroids, stuff like that).

In high school I got a job working at the Solar and Helioshperic Research Group (SHRG). I had a great time there building Qt/C++ applications, setting up web servers, deciphering 80_86x flight code, and writing data and algorithmic anaylisis libraries .

I was enrolled into an all guys school, Michigan Technological University, with a degree in Electrical and Computer Engineering. Why Electrical Engineering instead of Computer Science? I thought it'd be good to branch out and learn something else beside programming. But, I end up spending all my time programming anyways. But hey, I tried it at least.

I'm pretty involved in Michigan Technological events. I was president of the Chess Club my freshman year, I learned and then taught swing dance lessons, and I'm in AFROTC. I also teach chess lessons and program in programming competitions.

Unfortunately I got tired of the job at Solar and Helioshperic Research Group and started branching out. I did a bunch of independent programming for awhile. Android Dev, embedded stuff (MSP430, Arduino, PICs) and learned some new languages (python, Haskell, lisp..). I also attended a conference in Waterloo, Ontario on Quantum Key Distribution which I really enjoyed.

For Fall of 2012 I was accepted into a Cyber Engineering Program at Syracuse University where I learned principals of security and assurance. I also interned at Serco doing mission assurance work in cloud computing environments. Learning how to 1337h4x0rz and such.

Over the summer of 2013, I worked as an intern at Fog Creek Software, working on a product called "Trello".