The elements for Arcata primary wastewater included the grit chamber; the headwords; the clarification; the digester (Figure 11). The primary wastewater treatment is the first important step in the process of purify the wastewater. Wastewater contains many pathogens (bacterias; germs; fungi's; microorganisms and so forth) along with many nutrients that these pathogens will used as organic matter for the source of foods. These pathogens absorb oxygen in the process to breakdown the organic matters in metabolism.

Based on the City of Arcata Wastewater Treatment Train, the primary treatment includes the headworks, clarifier and digester (Figure 13). The goal of the primary treatment meant to separate the solid pollutants from the rest of the wastewater by density. The light scum layer floats to the top; the water in the middle and the heavier sludge to the bottom of the settling tank.(Figure#7) The sludge will have became the source of food for the bacteria and microorganism whom broke down and consumed the wastes. Meanwhile, the wastewater wastewater passed through to the next secondary treatment which include the biological and chemical treatment to further improved and treated the wastewater!!!(Figure#4)

The Headworks removed the trashes such as rocks; sands and female hygiene products in the wastewater using the Grit chamber and the Screener to separate and these machinery then dumped them into the trash recycle bin beneath the Clarifier as expressed in Figure#1 and Figure#3. (Figure#9)The clarifier belongs to the primary treatment when it used to contain the wastewater and stratification the sediment in the waste by gravity when heavier pollutants settle in the bottle of the clarifier; next the fats; the greases and the oils floated at the top of the clarifier!(Figure#4) The digester tank contained the sludge that bacteria and microorganism used as nutrient to break down the waste as showed in Figure#12.

According to the book "Water and Wastewater technology" by Mark Hammer and Mark Hammer Jr. , the primary treatment also included the preliminary treatment, in which pumping(Figure#5); screening and grit removal of trash and solid pollutants(Figure#10) also considered an important part of treatment(Figure#1; Figure#2 and Figure#3); furthermore, the primary treatment extended to the Sludge Digestion to provide as the source of food and nutrient for the bacterias and microorganisms to break down the waste in the water, therefore, the sludge moved either to the oxidation pond or to the solid disposal and back to the pumping and screening stations. Furthermore, the primary treatment required the two powerful pumps(Figure#5) to pump the wastewater up high in order for the heavier pollutant to settle to the bottom of the wastewater clarifier. Next, the sludge at the bottom had been become the source of nutrients to feed the bacteria and microorganism in the secondary treatment with including both biological and chemical treatment!(Figure#8) 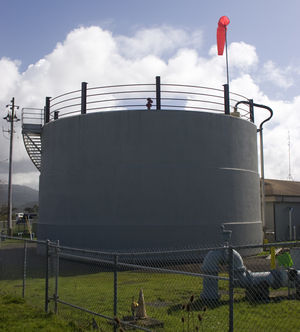 As seen in Figure#0 below, dirty waters could turn into beautiful flower and lotus!!! As many throwaway feces and urines could be recycle for drinkable waters and useful nutrients for other plants and animals in applying modern technologies and sciences engineering in turning the wasteful materials into useful products. These represented the modern challenge and destiny.