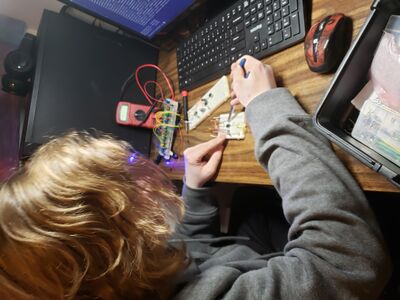 I am from a relatively small town about 75 miles outside of Chicago called Rochelle, Illinois. In recent years, I have moved full time to Houghton, Michigan to study Electrical Engineering at Michigan Tech. Here at Michigan Tech, I have been very active in the practical side of my studies-- spending a couple years in the Aerospace and Wireless Communications Enterprises heading up a variety of projects, including integration of a software defined radio to a cubesat payload and development of an android app capable of characterizing ambient sounds.

Additionally, I have had a variety of jobs since coming to Michigan Tech, such as theater technician work, several months in the IT department, and a summer with SiriusXM radio.

Currently, I am gearing up for graduation, and spending time with my two cats-- Orion and S'more.

For fun, I enjoy playing video games, playing with my cats, Dungeons and Dragons, and traveling. In the past when I had more resources, I was an avid jazz musician/singer and dabbled in blacksmithing.