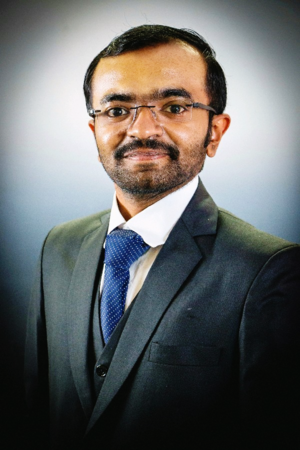 I am enrolled as a full-time Masters's Student at Michigan Technological University. My major is Electrical Engineering, specializing in a power system. I am having professional experience of 2 years, working at S.P.Engineering, Surat, India.

Research interest in power systems and renewable lies within me because of professional experience and undergrad undertaken renewable projects. Main idea moving towards this field was because of the increasing demand for power so advanced in technology is necessary in a generation, transmission, and distribution

• Managed, Guided and Monitored newly recruited team for designing and development of distribution panel with APFC.

• Leaded a team for analyzing and installing the cast resin dry type transformer onto Volvox Delta ship owned by Vanoord in Sri Lanka.

• Performed troubleshooting of DC slitting machine (415V/50Hz,7.5HP), diagnosed by doing back engineering and resulted a fault in DC motor.

• Magnetic Levitation was designed and demonstrated to learn about principles of magnetic suspension in which object is suspended with no support other than magnetic field. • Here vertical position of magnet was measured using a linear Hall Effect sensor (OH49E) and current in electromagnet was controlled by LPC2148, which was programmed using keil μvision software using C++ programing language

• Electricity is generated by replacing speed breaker with roller mechanism and mechanically connected to the shaft of dynamo (DC generator), which in turn generates electricity with minimal input and stores in battery bank.ie. Generation of power using kinetic energy of the vehicle.

•Leaded a team in ABU ROBOCON CONTEST 2016-2017 and Committee Member of RAS (Robotics and automation society) and obtained leadership and management skills by working as head of wiring department for ROBOCON. [[Category:]]