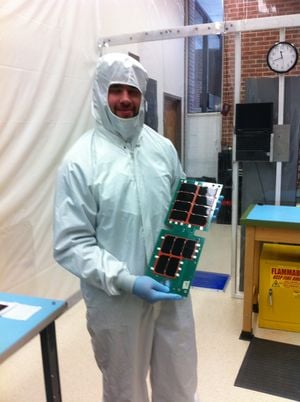 One of the side panels of the Oculus ASR
User data

I am an undergraduate student at Michigan Technological University in Houghton, MI. I am currently enrolled in and have completed multiple graduate level courses. My degree is focused on Power Systems. At Michigan Tech, I am the Solar sub-team lead in the Aerospace Enterprise. We are currently finishing up the assembly and testing of our Oculus ASR flight panels, and are looking forward to the future launch of our satellite.

Feel free to shoot me an email:
email: cggustaf@mtu.edu

The Oculus ASR is designed to be a reference satellite for the Air Force. It's primary function is to further the Air Force's ability to identify orbiting aircraft's attitude and adjustments in positioning. To do this, the Oculus has three different colored faces and a deployable panel to change the overall shape. I have been working on the solar panels since October 2012. Preliminary designs had already been made. Work completed since taking over includes refining the soldering process for the interconnects to make the best connection, testing the vacuum seal and adhesive, careful documentation, and assembling all 13 panels. Basic functionality testing has been performed, but further work needs to be done throughout spring semester 2014.