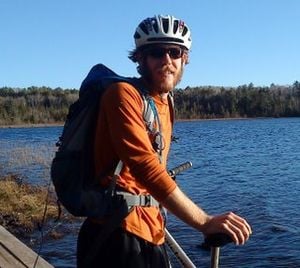 Ben completed his undergraduate in Mechanical Engineering, specializing in robotics, at Lake Superior State University. During which time, he enjoyed spending his summers as a whitewater rafting guide on the Chattooga River in South Carolina. Following his undergraduate studies, Ben worked as a Small Enterprise Development volunteer with the Peace Corps in Burkina Faso, West Africa. During a 2,500 km bicycle trip through five West African countries, Ben became aware of the newly developed Peace Corps Master's International program in Mechanical Engineering at Michigan Tech. Wanting to help develop the first and only Peace Corps Master's International program in Mechanical Engineering, Ben began graduate school. As a graduate student, Ben research has been involved in leading students on numerous bicycle design projects as part of Velovations, the bicycle design enterprise, and conducted research on Indoor Air Pollution in Tanzania. All of his time is currently spent on starting a company in Kenya focused on quality bicycle components for those who depend on bicycles to earn a living.