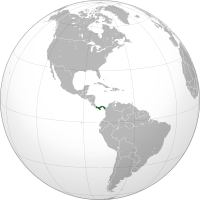 Panama, officially the Republic of Panama (Spanish: República de Panamá), is the southernmost country of both Central America and, in turn, North America. Situated on the isthmus connecting North and South America, it is bordered by Costa Rica to the northwest, Colombia to the southeast, the Caribbean Sea to the north and the Pacific Ocean to the south. The capital is Panama City.

The articles (and subcategories) below list various projects done in, programs and organizations operating in, writings about and resources for Panama.

The following 3 pages are in this category, out of 3 total.