(some statistics information that was originally located on this talk page has been moved to Appropedia talk:Statistics tracking --CurtB 11:45, 22 November 2006 (PST))

A brief "About" statement[edit source]

I'd like a brief description that would work as the intro here, plus something we could use to explain Appropedia any time we link to it, e.g. in a blog comment or email. How about this?

I am leaning towards poverty reduction (or capacity building) over international development because I feel that Appropedia supports a local group, working for local ends, just as much as we support an organization doing international work. (personally I like the postive construction "wealth augmentation" more than poverty reduction, but fear that it would be confused with "more money for the rich"). --Lonny 01:41, 18 December 2006 (PST)

I like the focus on poverty, but am concerned it sounds like a concern with economic status rather than well-being. Still, I'm sure we could find problems with any term we came up with, so I'm not too worried - for me it's a toss-up between "poverty reduction" and "international development".

"Wealth augmentation" is problematic as you say - like "economic growth" only more so. "Capacity building" seems less specific (we have to explain what capacity we're referring to). "Poverty reduction" could be taken as saying we accept poverty up to a point... "poverty elimination" would be a nobler goal, though less practical.

Are there other positive ways to say it? Really what we're about is improving real wealth and quality of life - economic growth will often result, but for some (especially those with the trappings of modern life) it will mean a step down in terms of economic consumption. --Singkong2005 (now known as Chriswaterguy) · talk 06:29, 18 December 2006 (PST)

I like both phrases. I'm willing to make the sentence a little bit longer and have some of both. How about...

Either on this page or elsewhere, some stats would be great. Some relevant stats from an email from Lonny:

Mediawiki has a statistic for active contributors at https://www.appropedia.org/Special:Statistics, it would be great if there was a record for each week. It currently says 34 (Users who have performed an action in the last 7 days). It is our slowest period of the year, but we have also had spam.

Based on Google Analytics data, we had about 34 logins per day over the past 4 months (not including those who stayed logged in). Of course, not all logins will edit and not all edits will log in.

We've had an estimated 50 to 100 thousand edits during this past year. I think there's a bit of a long tail here - many editors each doing a limited number of edits.

Posted this a while back (still available in the village pump archive). Perhaps the image can be integrated to the article: 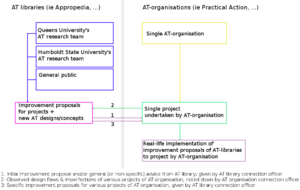 I find the chart confusing - I don't think it represents accurately what's going on.
It might be interesting at some point to have a map of Appropedia and our partnerships and programs, in SVG, which would allow it to be modified easily. Probably later, though - better to develop the community, content and our programs first, so we have something more to map. --Chriswaterguy 19:41, 22 July 2012 (PDT)