We develop knowledge to build rich, sustainable lives (read our vision and mission).

Catching rainwater around the world
Get a paperback from Amazon or free digitally at tocatchtherain.org 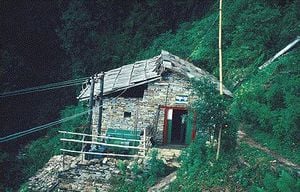 Micro hydro scheme showing the power house, the penstock and the transmission lines.

Water power can be harnessed in many ways; tidal flows can be utilized to produce power by building a barrage across an estuary and releasing water in a controlled manner through a turbine; large dams hold water which can be used to provide large quantities of electricity; wave power is also harnessed in various ways. It is a technology that has been utilized throughout the world, by a diverse range of societies and cultures, for many centuries. Water can be harnessed on a large or a small scale - Table 1, below outlines the categories used to define the power output form hydropower. Micro-hydro power is the small-scale harnessing of energy from falling water; for example, harnessing enough water from a local river to power a small factory or village. This fact sheet will concentrate mainly at micro-hydro power.

In the UK, water mills are known to have been in use 900 years ago. Their numbers grew steadily and by the 19th century, there were over 20,000 in operation in England alone. In Europe, Asia and parts of Africa, water wheels were used to drive a variety of industrial machinery, such as mills and pumps. The first effective water turbines appeared in the mid 19th century and it was not long before they were replacing water wheels in many applications.

In contrast to water wheels and the early turbines, modern turbines are compact, highly efficient and capable of turning at very high speed. Hydropower is a well-proven technology, relying on a non-polluting, renewable and indigenous resource, which can integrate easily with irrigation and water supply projects. China alone has more than 85,000 small-scale, electricity producing, hydropower plants.

Over the last few decades, there has been a growing realisation in developing countries that micro-hydro schemes have an important role to play in the economic development of remote rural areas, especially mountainous ones. Micro-hydro schemes can provide power for industrial, agricultural and domestic uses through direct mechanical power or by the coupling of the turbine to a generator to produce electricity.
Read more...

Out of clutter, find simplicity. From discord, find harmony. In the middle of difficulty lies opportunity.

Appropedia is created by people like you! Feel free to contribute to Appropedia your original research, projects, current works, observations and wisdom. Improve articles by clicking "edit" on top of any page or section. Our philosophy is: BE BOLD and contribute!