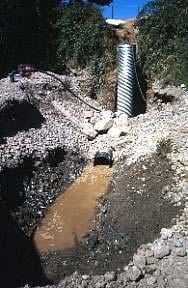 Pumping water through pipes placed in rivers is a common diversion method today, but in many cases the pipe is used in conjunction with a dam – and often it is not screened to prevent fish from being entrained. When properly screened, screened pipe intakes can safely divert water to a distribution system for immediate use or into a surface or subsurface storage site away from the stream for later use. In cases where sufficient water depth consistently occurs, dams can be removed without affecting the diversion. Where sufficient depth does not occur, “vaults” can be constructed to create enough depth to allow for screened pipe diversion. These “screened vault intakes” consist of a screened pipe placed in a pre-cast concrete vault set into the stream below the streambed elevation. The vaults are often located in a natural or constructed alcove at the edge of a stream to protect the structure from scouring and deposition. Even well protected vaults must be cleared of sediment and other debris on occasion. In addition, pipe diversions behind dams could be extended upstream to allow gravity to drive the diversion if possible, thereby allowing the removal of the dam.

The primary advantage of screened pipe intakes is that in many cases they can function without a dam or other structure to control water levels. Thus, sediment and fish can pass without significant disruption, and flows are affected only by the amount of water diverted. When combined with off-stream storage of some kind, screened pipe intakes can provide water diversions and storage functions with minimal stream impacts.

One concern with pipe intakes is fish entrainment. Intake screen technology has improved greatly in recent years, but entrainment continues to be a problem in certain cases. Another concern is that screens can be expensive to install and maintain. The chief limitation, however, to applying this strategy is that in certain streams, flows might not be sufficient to reliably pump water directly from the river during the diversion season(s). This problem could be minimized if pumping took place during higher flow periods and the water was stored offstream, or if a natural pool can be safely utilized. Another drawback in certain cases where a dam is removed and the water level at the diversion point is lowered is that diverters may incur the cost of installing and operating pumps to make up for the lost water surface elevation. The Idaho Department of Fish and Game has monitored numerous screening projects and found costs range from $2,200 to $6,400 per each cubic foot per second (cfs) the intake will divert.[9] Large diversions that involve sensitive fish species can be even more expensive. For example, the U.S. Bureau of Reclamation has completed a complex screen system on the Klamath River in Oregon to prevent endangered sucker fish from entering their 1000 cfs diversion canal.[10] The system cost $16 million to construct, which represents approximately $16,000 per cfs diverted.

Foots Creek Dam on Foots Creek, a tributary to the Rogue River in Oregon, was a 5-foot high, 40-foot wide concrete dam that blocks passage for coho salmon and steelhead. A denil fish ladder installed in 1998 by the Oregon Department of Fish and Wildlife proved ineffective in providing consistent fish passage. Originally built for irrigation and recreational uses, water was being pumped from the impoundment to a pond that was used for fire protection and recreation. In 2000, the Rogue Basin Coordinating Committee (RBCC) began working with the landowner on a solution that would provide fish passage and still allow for the diversion rights. In order to meet their goal of continued water supply and adequate fish passage, RBCC and the landowner agreed on a plan that called for the removal of the dam and installation of a screened intake pipe that would continue to divert the necessary water to the nearby pond. The project was completed in 2001 with the breaching of the dam ($2,600) and installation of pump and pipe ($4,000). By removing this structure and using a screened intake pipe system to continue to supply water to the pond, six additional stream miles on Foots Creek are now open for migrating salmonids.[11] To learn more about the Foots Creek project contact Chuck Korson with the U.S. Bureau of Reclamation at (541) 389-6541 or visit http://www.pn.usbr.gov/project/wat/publications/footscreek.pdf.

The Doug James Diversion Rehabilitation project in Oregon’s Illinois River valley replaced a gravel “push-up”[12] diversion dam with a screened intake vault and associated works for $32,500 in 1998. After five years the irrigator continues to be satisfied with the effectiveness of the new structure. For more information, contact Glenn Ginter, Illinois Valley Watershed Council Coordinator, (541) 592-3731.