This project is meant to show the capabilities of the MOSTdelta 3-D printer. This project was made using fully opensource software including Repeteir-host, OpenSCAD, and cura.The model can be found at http://www.thingiverse.com/thing:495018

The issues that I had encountered with this part are as follow:

1. The printer head was clogged. This caused the printer to no longer extrude the PLA filament. To correct this I had to dis-assemble the hot end, heat it to 200 degrees Fahrenheit then force PLA filament through the head. 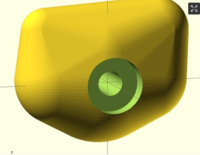 This project is meant to show you how to mesh two or more different files together. the following link will direct you to the part files. https://www.youmagine.com/designs/celtic-knot-outlet-cover#!comments The issues that I had encountered with this project were: 1. the first print had some knots that were to thin for the filament to extrude properly resulting in a knot that showed as just dots. 2. The flow rate was too low resulting in gaps in the top

This projects goal was to create a project that would lessen the cost of a useful object. I decided to make a bicycle pedal for the black mamba bicycle. This bicycle is commonly found in sub Sahara Africa and relatively low cost transportation method. The campus wide goal is to prototype as many parts of this bike as possible, allowing for anyone with a rep-rap printer to set up shop and print off a bike. This can be found at[[1]]

The final regular project for this class was to make something of value. This project can be anything you want or could use but needs to save money. I decided to make a hockey helper. As a new hockey player i sometimes struggle with using my non dominate hand for more than i am supposed to. This tool is modeled from the soft hands stick handling device and will not allow you to improperly use your non dominate hand. This device can be found atthingiverse.

All of the graduate students have to make some sort of an improvement of the printer. I looked for the something that i thought was the most annoying part of the printing process. I decided to make a filiment holder. Now i knew that there were designs for these holders. While looking at these designs the large majority of them were not fully printable or they were made to fit on specific brand of filiment. This was the moment i knew to make a filament holder that was fully printable and adjustable. The design that i made using open scad can be seen in the following pictures and the links can be found herethingiverse. The instructions for making this part can be found hereFully_adjustable,_fully_printable_spool_holder 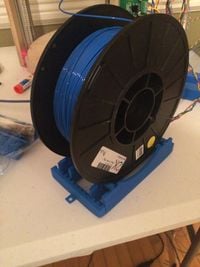