Numerous different methods exist for purifying water, all with the same intended result: to obtain water that is safe for humans to drink, referred to as potable. Some of the most common methods of water purification are boiling, addition of chemicals (iodine or chlorine), reverse osmosis, and filtration. All of these methods are effective, but may require resources that are unavailable in some locations. For example, while it may be very difficult to obtain chemicals or maintain a fire in remote areas, sunlight is often a readily available resource usable for water distillation. This document is a proposal to implement a passive solar distillation system prototype as a working example of utilizing energy from the sun to provide safe drinking water for human consumption.

Passive solar water distillation is considered an appropriate technology because it operates on the same principles that produce rainfall, purifying water through a process of evaporation, condensation, and collection. Solar distillation could be considered a form of bio-mimicry because of its relation to the rain cycle and the greenhouse effect. The solar distillation process can be performed on brackish, salty water or from sources such as rain, municipal, well, or spring. By utilizing the plentiful energy of the sun to evaporate water, dissolved metals and minerals, such as arsenic, barium, cadmium, chromium, and lead are separated from contaminated water [1]. Distillation also removes salts and biological contaminants such as E.Coli[2].

A conventional solar distiller is a box with a glass roof, referred to as a glaze, set at and angle from the horizontal to ensure optimal sun exposure. This angle is roughly equal to the latitude of the location. The distiller faces south if in the northern hemisphere, north in the southern hemisphere[3]. Untreated water is routed into a holding basin inside the distiller. Radiation from sunlight penetrates the glass and heats the inside of the distiller, causing the water in the basin to evaporate. The absorption of higher frequency radiation heats the water and solar still internals. The glaze traps infrared re-radiation causing a greenhouse effect resulting in higher temperatures [4]. The evaporation process separates contaminants from the water and results in a thin condensate on the underside of the glass cover. The condensed, distilled water then runs off the glass into a trough, and is transferred to a water storage container for domestic use. Contaminants and particulates remain in the basin and must be washed away periodically. 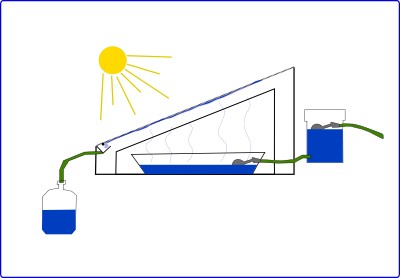 Scott Harris and Jeffrey M. Hinton, participants of the Parras 2005 program constructed a solar water distiller and provided a final analysis of their project on 5 August 2005. The unit they constructed is located in the laboratory at the Universidad Tecnológica de Coahuila, Parras Campus. This project provides a solid basis for further research and development of small scale water distillation in Parras. However, after reviewing their final analysis, construction infrastructure, and materials used, we propose some design changes and plan to research different building materials. Modifications include: substitution of the insulation material, floor coating, basin structure, and design of the collection trough. The intention is to improve upon the existing design, utilize more affordable, durable materials, and research additional methods for increasing efficiency. Portability is not a consideration with this prototype design. The materials and design chosen do not lend themselves to easy transport. The glaze is fragile, the wood veneer internal frame is frail, and the metal basin is not secured. This unit will only operate at the UTC campus, subsequent iterations of this design should consider portability issues.

This passive solar water distiller experiment is intended for Universidad Tecnològica de Coahuila campus located on Madero Street, Parras, Coahuila. UTC has a student, faculty, and employee population of 205 people, comprising a continuous demand for potable water. The water demand is important because it directly affects the design of the distiller in respect to desired quantity of water output.

The public supply is the most likely source of water. Although municipal water has been given some treatment, it is not always potable. Municipal water is currently the easiest method of water acquisition. In the future a rainwater catchment system could be implemented. At this time, the location of the distiller on the UTC campus is undetermined pending investigation of the best possible placement. A flat and level area with direct access to water and sun is necessary. considerations must be taken to ensure it is not in a place where the glaze can be easily damaged by vandalism or accidental breakage. The system must be located in an area that facilitates easy access and maintenance.

Currently, the UTC purchases their drinking water from SierrAzul in 5-gallon jugs (19-litres) at a cost of approximately $1.40 USD ($14.50 pesos) each. Potential benefits of implementing this system are reduced cost of water and self-sufficiency. Assume the cost of the system is $106.92 + $79.32 USD = $186.24 USD. This is the cost of materials from the previous year added to the total cost from the second iteration. If UTC consumes one 5-gallon jug of water per day, the system would pay for itself in approximately 133 days based on the savings from not purchasing the water. The presence of this project at UTC may influence students to pursue additional education in solar technology, possibly taking the knowledge with them in their daily lives, and into the future.

Insulation is by far the most difficult material to choose. Many options are available, and we have not yet made a decision what material will be most appropriate when comparing cost, availability, and effectiveness. Some possible solutions:

The water basin is fairly small, spray painted black, and sealed with silicone glue. Some ideas for improvement:

This could be replaced with fabricated metal, ceramic, or another material with high temperature durability. Considerations should be taken regarding the conductivity of the material chosen.

Much of the exiting glue needs to be removed and replaced with sturdier fasteners such as brackets and screws. The chosen material available in this region is high temperature RTV silicone gasket sealant.

Cloudy in the morning. Rain storm later in the day.

Fix thread mismatch.
The float valves use a fine thread, but hose connectors use coarse thread. This mismatch causes unreliability of connections, and constant leakage. Currently several windings of Teflon tape are in place to stop the leakage. The best solution is a thread adapter or purchasing fine thread hose connectors.
Construct the system out of something other than wood, especially not particle board.
Metal or cement may hold up better than wood when exposed to rain, wind, and high amounts of sun.
Use a different method of depositing condensed water droplets in the collection trough. The tube is not completely effective.
One possible solution is a curved piece of plastic running from the bottom edge of the glaze diagonally into the collection trough.
Install easy hose connect/disconnect in the rear of distiller.
The system should be easy for anyone to connect or disconnect.
Completely seal perlite insulation from the water chamber.
Currently silica powder from the crushed perlite is contaminating the entire water evaporation chamber.

As a functional unit, this project was only partially successful. There are many issues that still need to be solved regarding the efficiency, ease of use, and maintainability of the distillation system. The water recovered from the distiller has not been properly tested, but this water is not likely to be much safer for consumption than the original untreated water.

As a continuation of the work from the previous year, the project has progressed. Several components, such as the water intake system, internal frame, insulation, and collection trough, have improved greatly. The addition of a float valve to allow for automatic water input solved one of the major problems encountered originally. The distiller no longer must be filled manually, and there is a much lower chance of the system going dry and melting internal components. The internal frame is now sturdier, and is using black plastic rather than spray paint to maintain internal temperature. The perlite insulation is far more resistant to heat than styrofoam. The collection trough is fabricated from metal and will not melt as did the previous PVC trough.

This project has good prospects of improving significantly in the years to come. The next group to work with the solar distiller will have two years of experience to draw from in designing and implementing the system which may one day provide safe drinking water for Universidad Technológia Coahuila in Parras de la Fuente.