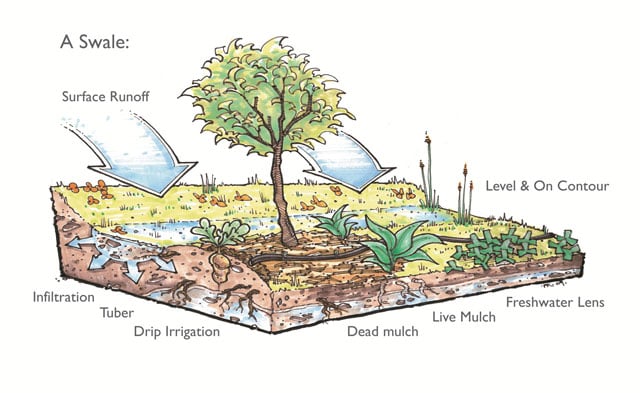 Swales, also know as bioswales, are shallow trough-like depressions created to carry water during rain or snow melt. They are rapidly becoming a staple in the design of sustainable landscapes due to their many advantages. Many governments are beginning to require bioswales along with other "best management practices"

Swales can re-direct water away from sensitive areas, such as a basement home or water-sensitive plants.  They act as a water filter with soil as the medium and stores water from rainstorms and snow runoff until it is filtered through the soil.  After the water filters through the soil, it will recharge the local groundwater.

Swales covered or partially covered with grass can be used as walking paths.  However, they will be unsuitable during wet periods as they will be underwater, or soft and muddy.

Dry swales are above the groundwater, such that they only hold water above the soil surface temporarily.

There are other techniques similar to swales. A swale can be considered a kind of bioretention cell or rain garden, but shallower, in a channel shape, and covered with grass or other plants.

If the soil is very permeable, the runoff infiltrates easily. If not, either an underdrain may be used, or holding capacity increased, or it is accepted that above a certain level of rainfall runoff, overflow will occur.

If an underdrain is used, the emphasis is then on stormwater management and it should be expected that the potential for groundwater recharge is greatly reduced. The underdrain would be a perforated pipe in a gravel layer below the bottom of the swale.

Another way to reduce the likelihood of this level of runoff is to increase the absorption capacity of upstream parts of the catchment, through improvements in soil, and/or adding more retention devices such as additional swales (perhaps small ones) and rain gardens.