Redwood Coast Montessori and the Manila Community Center allowed Humboldt State University's Fall 2014 ENGR215 Introduction to Design class to implement several student-designed projects that benefited the community. The Wayfinding Entrance Garden project's main objective was to create an attractive, inviting entrance for the school that included native plants. The inclusion of edible plants was also a consideration in the design. The garden was envisioned as a place where students might be able to learn about the care of a native garden while enjoying the sights, smells and tastes of the plants.

Redwood Coast Montessori and The Manila Community center are located in a dune environment near Manila, California. The proximity of the location to the ocean was considered in the design, as was the fact that the entrance area must be appealing to both the communities of the school, and of the Community center.

G3 consists of four Humboldt State University students: Paul Acosta, Emily Higbee, Jose Lara, and Carmen Torres. They are all enrolled in the fall semester of 2014 Engineering 215 course, Introduction to Design taught by Lonny Grafman. This group was given the task of making an aesthetically pleasing entrance garden for Redwood Coast Montessori, which leases the property from The Manila Community Center.

Specifications and considerations are the defining aspects of the Wayfinding Entrance Garden. These aspects have been set forth by the project team G3 in cooperation with the client at Redwood Coast Montessori based on the school's and the community center's needs. The entrance garden design must meet the criteria, and stay within the constraints listed below in table below.

The final design is called Natural Native, which includes all native plants[1] from California. The lack of large planters and a stepping stone path give this design a more natural feel.

All the plants that were planted in the ground are native to the local climate of Northern California.[2] We divided the plants in the ground into two main categories, forbs (an herbaceous flowering plant) and secondly trees or shrubs[3], which will grow to be large. 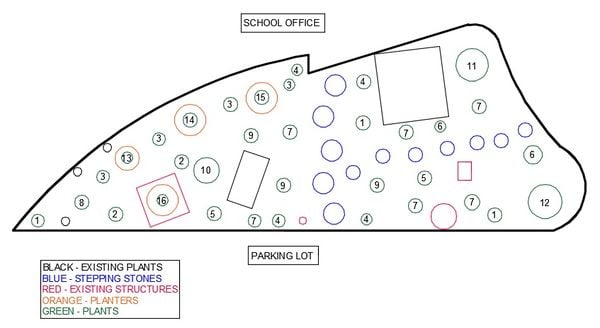 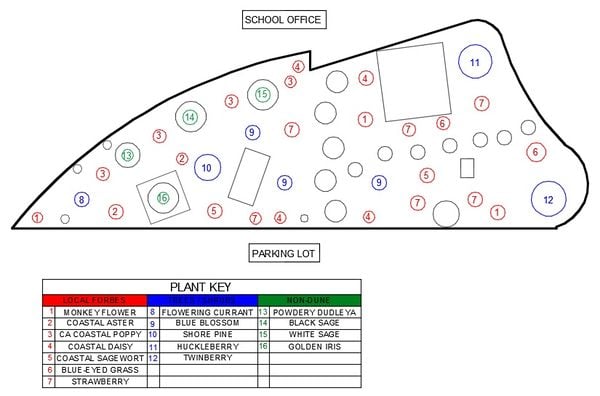 G3 had a total budget of $400.00. The total that the team spent on the project was $81.00. Soil and plant containers (pots) were donated. $42.00 was spent on purchasing plants for the garden. A list of materials is shown.

The labor cost consist of the amount of hours that the team, G3, spent designing and building the garden. The majority of G3 time was spent on the implementation process of the design, as shown in Figure 5.

In order to maintain the garden some weeding needs to be done so that weeds won’t spread and take over the garden. The plants also need to be watered regularly until they are established at which time they will require very little maintenance. Maintenance will mostly be done by the students of Redwood Coast Montessori, volunteers or by school staff.

Visitors used the new stepping stone path and commented on the fact that the stride length is perfect and that they no longer feel badly about walking through the garden now that the path is official. Many comments from visitors make it clear that the new garden is much more visually appealing and inviting than the previous garden. The only issue is that the ground cover will take a while to spread and some weeding will have to be done during this time.

These are the few basic steps the the team G3 followed to reach the endgoal of their project; a beautiful enrance area garden.

Several last minute adjustments needed to be made to the final design. The client at Redwood Coast Montessori requested another stepping stone to be placed into the path to accommodate the younger students at the school. Also, the original design included covering the entire area with the weed mat, but unfortunately the donated material was not enough to cover the entire garden, and purchasing more would be outside the price range of this project.

This is the Poster for the entrance garden and here are the list of plants used for the garden. 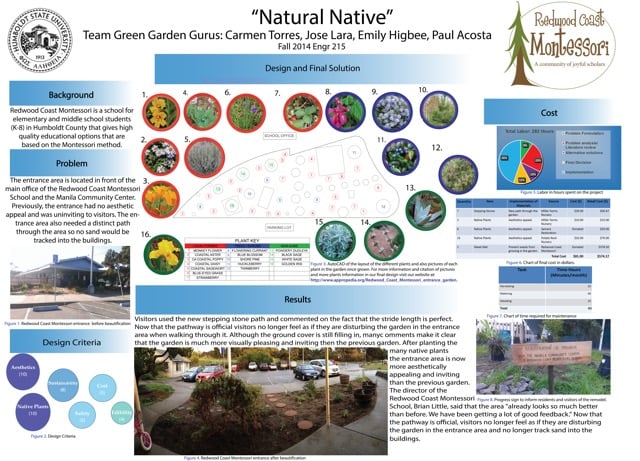