Open-Island is a modular "floating island" construction system, (mostly) made of upcycled materials. It was developed in India and Germany and released open-source in 2014. Its growing makers community later formed the makers4humanity collective. 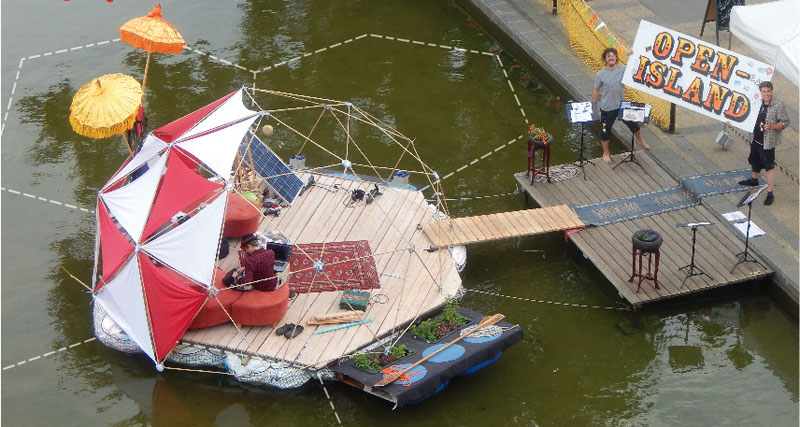 The vision of Open-Island [1] is to provide an open-source DIY construction plan for floating islands, that can be built easily and at lowest cost everywhere. "The demand for floating islands rises with the sea-levels" is the claim of inspirator/co-creator Joy Lohmann [2]. The system shall be modular and expansible on water and can be used for a variety of purposes. Further, all needed informations, knowledge, manuals shall be assembled and openly shared to enable people around the world to build their own sustainable low-tech Open-Islands and raise their resilience along waterbodies.

> After having developed the open-source construction manual for Open-Islands, the involved makers started an international makers4humanity collective in 2015 [9] to expand their outreach and impact. As of the first of their m4h-Labs, annual change-makers gatherings at the flooded coal mine and festival location Ferropolis in central Germany, they widened their areas of interest to all fields of co-creative transformation.

> In 2018, the basic float system was upgraded and is based now on hexagonal units with a stainless steel frame. The "Open-Island 2.0" manual was released 2018 in German [10] and English [11] and showcased at the MakerFaire Berlin. [12]

> Beside being a low-tech construction system, Open-Island also is considered to be a "Social-Sculpture" that works as an attractive symbol for glocal transformation. Being a flexible, modular real-world platform, it corresponds perfectly with the philosophy of the change-makers online platform. All further Open-Islands and maker activities in this context are related and interconnected with the growing makers4humanity-collective.

> Last but not least, the German NGO Positive Nett-Works, host of the Open-Island projects and moderator of the makers4humanity collective has adapted the spanish Open-Source crowd-engine Goteo [13] and runs crowd-sourcing campaigns to assemble more open-source solutions in various contexts. [14]

With this modular construction system, the floating platforms can be built in any size and shape for various purposes. The most promising areas for the implementation of Open-Islands (on inland waters) are:

In December 2018, Open-Island is a central element of the cooperative ActUp happening "Lake of Change" in Bangalore/India. Together with local organizations, institutions, companies and interdisciplinary volunteers, the makers4humanity focus on urban waterbodies and their shores within a 5-weeks co-creation and prototyping process.

1. Within the 4-week interim program of the Srishti Institute students, the situation and potentials of water bodies and their shores will be analized with the aim to develop and prototype „EcoDesigns“ in art and culture, design or social practise.

2. The student results as well as other best-practises, concepts and strategies from related organizations, involved officials and interested individuals will be presented and discussed at the Lake-of-Change conference at the Metro Art Centre on Dec.8th

3. Parallel, we collect further content through the „EcoDesign Challenge“, an open crowdsourcing campaign for suitable designs, methods, concepts for socio-ecologic urban transformation. All entries will be presented on the makers4humanity onlineplatform and a best-of selection will be exhibited at the LoC-conference.

4. Like in earlier makers4humanity ActUps, local makers and related partners together with international volunteers will realize selected objects/concepts within the open maker-week from Dec.10th to 17th. The design-thinking workshop will deliver feasible prototypes that can be further developed or directly adapted for specific purposes and locations, as all results shall be shared open-source.

5. Finally, we´ll celebrate the Lake-of-Change festival on December, 22nd/23rd. The program of this radically participative event totally depends on the interaction and contributions of the LoC partners, sponsors, neighbours, volunteers. It will demonstrate the success of this temporary Act-Up happening, become its closing ceremony and will eventually open the path for further cooperative activities in Bangalore and beyond.

Part of this collaborative ActUp happening is to co-create an Appropedia project page: