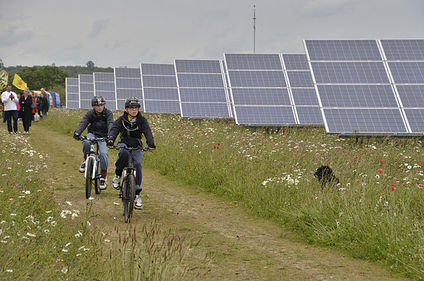 This article focuses on information specific to the United Kingdom. Please see our Community energy page for a topic overview.

Look Up, made by 10:10, carbon cutting campaign

In April 2011 a YouGov survey indicated that the number of households in fuel poverty had risen to 6.3 million households, representing approximately 24% of all households in the UK. W

Interactive Maps: trends in fuel poverty, energy use and energy efficiency measures, The Department of Energy and Climate Change

The UK is one of the best locations for wind power in the world, and is considered to be the best in Europe. Wind power delivers a growing percentage of the energy in the United Kingdom and at the beginning of August 2015, wind power in the United Kingdom consisted of 6,546 wind turbines with a total installed capacity of just over 13 gigawatts: 8,258 megawatts of onshore capacity and 5,054 megawatts of offshore capacity. The United Kingdom is ranked as the world's sixth largest producer of wind power, having overtaken France and Italy in 2012. Polling of public opinion consistently shows strong support for wind power in the UK, with nearly three quarters of the population agreeing with its use, even for people living near onshore wind turbines. W

The first community solar farm in the United Kingdom is the 5 MW Westmill Solar Park, near Watchfield, Oxfordshire W

Saving energy is the cheapest of all measures. W

In the United Kingdom fuel poverty is said to occur when, in order to heat its home to an adequate standard of warmth, a household needs to spend more than 10% of its income on total fuel use. Adequate warmth is generally defined to be 21 °C in the main living room and 18 °C in other occupied rooms during daytime hours, with lower temperatures at night, following the recommendations of the World Health Organization. Fuel poverty is not just about access to heating as the definition of fuel is taken to include all expenditure on domestic energy, including that used for hot water, cooling, lights and appliances. W

One of the co-operatives it has created, Energy Prospects Co-operative, specialises in taking early stage wind co-operatives through the development and planning application stages to the point where a community share offer, managed by Energy4All, can be launched to fund the project.