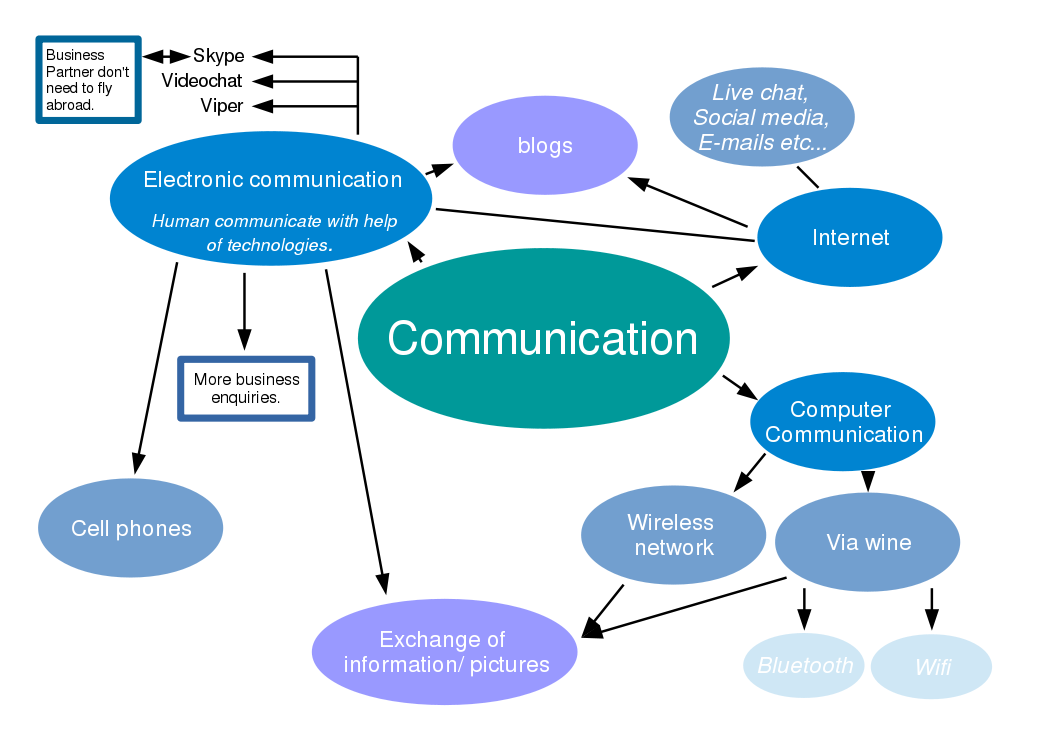 Communication comes from Latin and means "to share". Communication is a way to interact with other people, exchange ideas, information and so on. Machines also communicate with humans (H2M) and machines communication with each other (M2M). Unlike humans, computers and gadgets can be connected to each other through wireless networks and via radio links such as Wifi. For long distance people used to send post, but life has become much easier with the development of technology. Communication can be divided into various sections. 4000 years B.C. people used hieroglyphics to communicate. Now we use mobile phones and we are accessible anywhere there is reception. The internet has enabled a communication explosion.

The precurser to the Internet was invented in 1969. The first civilian use was for connection with universities. The original aim was to ensure secure communications in the event of war. In 1997 around 121 million people worldwide used the Internet. Today they are around 2,925 million people who are online. Many use different social networks for communication. The most common social network is Facebook with 1,276 million registered users.

Technology in the future[edit | edit source]

Nowadays we've got stuff we previously dreamt about. At the television show Startrek the actors are playing with a lot of stuff we already now an love in the real world, the so called communicator is an very bad version of our modern smart phones.

6000 BC Drumming
- In Africa is a drum a normal communication way.
-- Drum messages have a speed of 160 kilometers per hour
2400 BC Courier Service
- In Egypt, the first courier service was invented. At that time for scrolls
500-550 BC post system
- Originally from Persia
-- “Win!” for this message Pheidippides ran about 40 miles from Marathon to Athens. Today there are more than 500 marathons per year.
200 BC smoke signal
- So communicate the old china along the great wall.
59 AD Newspaper
- "acta diurna" is the first newspaper printed on panels and published in Rome.
--Julius Caesar made with "acta Diuma" a fortune.
12 century Pigeon post
- The Egyptian sultan Nur Ad-Din reached a Pigeon post for himself.
-- The British use in the Second World War more than 250,000 letter pigeon.
1840 Telegraphy
-Samuel Morse revolutionized with the construction of the first telegraph the communication over long way.
1946 mobile phone
- The first phone call from a mobile phone.
-- The first mobile phone weighed 37 kilograms. Today calls in the US over 34,000 people per second.
1971 E-Mail
- Ray Tomlinson sent the first email.
--Today, more than 100 trillion mails per year.
1992 SMS
-the first SMS sent "Frohe Weihnachten" to the company's boss from Vodafone.
--2011 8.000.000.000.000 SMS were sent.
1995 VoIP
VocalTec released Voice-over IP
2004 Facebook
-Mark Zuckerberg presents on 4 February TheFacebook.
-- 250 million photos were uploaded daily in 2012.
2006 Twitter
- The NYU student Jack Dorsey launches twitter. The first tweet was “just setting up my twttr”.