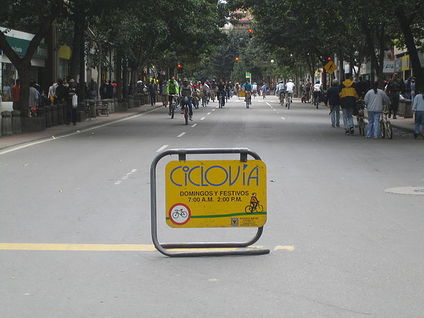 121 kilometres (75 miles) of Ciclovía on Sundays; a massive system (376 km (234 mi) as of 2013) of bicycle paths and segregated lanes called ciclorrutas; and the removal of thousands of parking spots in an attempt to make roads more pedestrian-friendly and discourage car use. Ciclorrutas is one of the most extensive dedicated bike path networks of any city in the world, with a total extension of 376 kilometres (234 miles). It extends from the north of the city, 170th Street, to the south, 27th Street, and from Monserrate on the east to the Bogotá River on the west. The ciclorruta was started by the 1995–1998 Antanas Mockus administration with a few kilometers, and considerably extended during the administration of Mayor Peñalosa with the development of a Bicycle Master Plan and the construction of hundreds of kilometers.[29] Since the construction of the ciclorruta bicycle use in the city has increased. [1]

Improving life in Bogota by empowering citizens to cycle, September 23 [2]