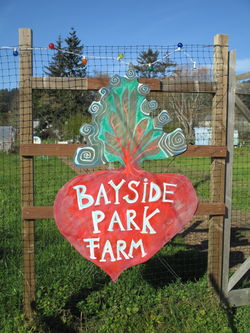 The Engineering 305 class - Appropriate Technology - that is going to work on a vermicomposting project, also known as worm composting, at Bayside Park Farm, Arcata, CA. The group, will work on this project during the 2015 spring semester, aims to contribute and recover the previous project that is no longer in use. When the group went to the Bayside Park Farm, they found the outdoor composter obsolete due to lack of maintenance; however, it was in usable conditions.

The objective of this project is to recover the already existent outdoor composting box in order to fulfill the needs of the farm. The group was informed that the farm requires 15 gallons of compost, monthly, thus the group intend to supply that need.

“The principles behind vermicomposting are relatively simple and related to those involved in traditional composting. Certain species of earthworms can consume organic residuals very rapidly and fragment them into much finer particles by passing them through a grinding gizzard, an organ that all earthworms possess. The earthworms derive their nourishment from the microorganisms that grow upon the organic materials. At the same time, they promote further microbial activity in the residuals so that the fecal material, or "casts" that they produce, is much more fragmented and microbially active than what the earthworms consume. During this process, the important plant nutrients in the organic material - particularly nitrogen, phosphorus, potassium and calcium - are released and converted through microbial action into forms that are much more soluble and available to plants than those in the parent compounds. The retention time of the waste in the earthworm is short. Worms can digest several times their own weight each day, and large quantities are passed through an average population of earthworms. In the traditional aerobic composting process, the organic materials have to be turned regularly or aerated in some way in order to maintain aerobic conditions. This often may involve extensive engineering to process the residuals as rapidly as possible on a large scale. In vermicomposting, the earthworms -- which survive only under aerobic conditions -- take over both the roles of turning and maintaining the organics in an aerobic condition, thereby lessening the need for expensive engineering.” [1]

A practical example of the differences between both can be seen in Composting Vs. Vermicomposting: Comparison of End Product Quality, which establishes that “Composts and vermicomposts from a municipal composting plant in northwestern Patagonia, both having undergone a thermophilic phase, (with the vermicompost being inoculated with earthworms after the thermophilic stage) and a nonthermophilic backyard vermicompost were studied. Their effects on soil biological and biochemical properties and plant growth were evaluated in laboratory incubations and a greenhouse trial, using a degraded volcanic soil amended at rates of 20 and 40 g kg super(-1) of vermicompost or compost. Between the two municipal products, the vermicompost had significantly larger nutrient concentrations than the compost; when mixed with the soil, the vermicompost also had higher microbial populations size and activity, and produced increased ryegrass yields. Compared to the municipal compost, the backyard vermicompost had similar or higher nutrient concentrations but its effects on soil microbial biomass, soil microbial activity and ryegrass yields were lower. Our results suggest that no generalization can be made regarding the higher quality of vermicomposts vs. composts, because the product quality depends both on the original materials and the technology employed.” [2] 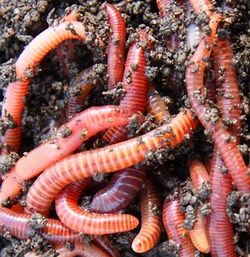 According to Dickerson, from a wide variety of earthworm species, only a few are able to be used in the vermicomposting process. “The most common types of earthworms used for vermicomposting are brandling worms (Eisenia foetida) and redworms or red wigglers (Lumbricus rubellus). Often found in aged manure piles, they generally have alternating red and buff-colored stripes. They are not to be confused with the common garden or field earthworm (Allolobophora caliginosa and other species). Although the garden earthworm occasionally feeds on the bottom of a compost pile, they prefer ordinary soil. An acre of land can have as many as 500,000 earthworms, which can recycle as much as 5 tons of soil or more per year. Redworms and brandling worms, however, prefer the compost or manure environment. Passing through the gut of the earthworm, recycled organic wastes are excreted as castings, or worm manure, an organic material rich in nutrients that looks like fine-textured soil.” [3] [4]

According to Edwards (1995), some changes in the temperature can influence the composting process, comparing with the traditional method, the vermicomposting is more sensitive because of worms “...vermicomposting systems must be maintained at temperatures below 35 ºC. Exposure of the earthworms to temperatures above this, even for short periods, will kill them. The processing of organic materials occurs most rapidly at temperatures between 15 ºC and 25 ºC (60 ºF to 79 ºF) and at moisture contents of 70% to 90%. Outside these limits, earthworm activity and productivity, and thus the rate of waste processing, falls off dramatically. For maximum efficiency, the feedstock should be maintained as close to these environmental limits as possible.” [1]

In Shanthi’s book - Vermicomposting of Vegetable Waste -, three worms species (Pheretima posthuma, Eisenia sp., and Perionyx excavatus) were able to biodegrade vegetable wastes. Considering, also, parameters that include “substrate moisture, temperature, and oxygen requirements. Results indicated that all three earthworm species survived in soil containing all moisture levels, but none of the species survived in undecomposed wastes. E. foetida and P. excavatus survived at 20, 30, and 35 degree C. Best moisture conditions ranged from 20-80%. Substrates with less than 20% fermentable organic substances could be used directly in vermicomposting. The most appropriate earthworm species for vermicomposting was found to be P. excavatus.” [5]

According to Norzila (2012), “the use of food waste recycling concept can be an interesting option to reduce the use of landfill. This strategy is more environmental friendly, cheap and fast if proper management to treat the food waste is applied.” The author also emphasizes that “In this vermicomposting treatment, the nightcrawler earthworm are used to treat the food waste.” In our case, the waste food will be collected from the farm itself. The article made an experiment to see if the vermicomposting can be considered a ecofriendly strategy. “The vermicomposting study was taken about two weeks time. After the treatment, the soil sample are tested for nitrogen (N), Phosphorus (P), and Potassium (K) concentration. Based on the result obtained, it shows that vermicomposting will reduce the weight of treatment sample and the concentration of N, P, and K for the soil is greater than the chemical fertilizer. Therefore, vermicomposting is a promising alternative treatment of food waste as it is more ecofriendly.” [6]

How to make a simple Vermicomposting?

For the best support to those interested in the practice of vermicomposting, the veteran vermicomposter Martha Yount, Breathitt County agent (Kentucky), provides the best tips. The first step is accomplished by the choice of the two containers, the most appropriate should be at least six inches, but no greater than 12 inches in depth. Earthworms prefer dark environments, then the plastic containers are ideal freed. This container should be rinsed thoroughly in warm, soapy water, and then drill up holes in the sides, the bottom and the lid to adequate ventilation and drainage. Yount advises to make them with the maximum diameter of half an inch, but if you make smaller holes, just put in more of it. The worms will migrate through all the boxes up and down, always using the holes. The first container is where they are deposited waste, the second serves as collector to store the organic manure produced.

The next step is to shred newspaper for bedding, the bedding is as a place of safety, where earthworms are comfortable and there should be digesting in both boxes. Then, Mix in a cupful of potting soil to keep the worms' gizzards working properly, and moisten with a mist sprayer. The bedding should be kept damp but not wet. It is advised to keep 75 percent humidity. Yount advises that it is necesssary two pounds of worms for seven square feet of surface area. It can be found in many gardening catalogues, which sell composting worms at a reasonable price. All vegetable scraps are suitable for vermicomposting. Stale cereal, grits, oatmeal, cookies, pizza crust, coffee grounds and tea bags are also acceptable. No meat or dairy products should be placed in the vermicomposter. The list of unsuitable food includes oil, grease, and any kind of cheese. When the bedding were ready, it is possible gently dump the worms into their new home. Then toss in food scraps and watch your leftovers turn into compost. The composter is a simple and hygienic process of recycling organic waste we produce at home, however, there are some precautions that should be taken to avoid bad odors, animal attraction and death of the worms. [7]

The following criteria will be used to measure and orientate this project. The eligibility criteria were chosen based on the suggestions of the students who are working on the project, as well as the requirements of the main farmer and needs of Bayside Park Farm. The scale (1-10) represents the importance level of meeting the constraint of each listed criteria.

The timeline proposed was based on the working developing. The steps were made aiming the support for the worms and its respective function developed for the project, in order to obtain excellent finals results.