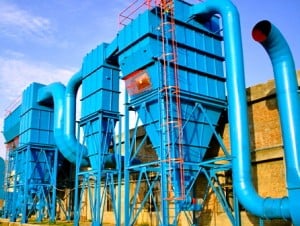 A baghouse uses a series of fabric filters (often called bags) to remove particulate matter (i.e. dust) from the air. The dirty air is brought to the collector by means of a ductwork system that uses a motor-driven fan to create a vacuum that pulls in the dirty air and then pushes it through the system. Once it enters the baghouse, the dirty air is forced through the fabric filter causing the particulate to be caught by the fabric and then allowing the now clean air to pass through. Once excess dirt builds up on the surface of the filters over time most systems will use a self-cleaning mechanism to remove the excess from the surface of the filters.

Despite the passing of numerous environmental and safety regulations that essentially require the use of a baghouse, many facilities still operate without one. Installing, maintaining and operating a baghouse that is sufficient to capture and control the facility's hazardous particulate pollution.

With a history going back to the early 1900s, baghouses now play a vital role in control emissions of harmful air pollutants. Without baghouse most industrial processes would not be possible or would release massive amounts of devastating pollution.