From Appropedia
Redirected from White gooseberries

Indeed, taking the example of wild UK gooseberry populations, the spread of Powdery Mildew has created a selection pressure for genes providing resistance to it. Modern gooseberry cultivars have been interbred with R. hirtellum (American Gooseberry), which co-evolved with Powdery Mildew and has resistance.[8] In the wild, original native species of gooseberry are subject to gradual gene death while resistant cultivars which spread into the wild have advantage.

Classical Greek and Roman writers do not mention gooseberry.[9] The first recorded mention of gooseberry is in 1276, listed in purchases for the Westminster garden of Edward I.[10] Originally gooseberry was a woodland and hedgerow plant, the first selective breeding took place in the British Isles in the 16th century, particularly by amateur growers in the industrial midlands.[7] Traditionally, gooseberry was grown in orchards in the Fens (Eastern England).[11] Yearly gooseberry competitions with awards for the largest gooseberry took place in Lancashire,[11] and still take place in some UK villages.[7] This stimulated creation of hundreds of cultivars of gooseberry in Britain.[9] Gooseberry growing reached its peak in the 19th century.[9]

When Mildew spread to the UK in approximately 1905, the gooseberry industry was devastated.[12] This has been a significant factor in the reduced popularity of gooseberry since,[12] although the taste and the thorns may have also played a role in this as thornless berry plants and imports of exotic fruit from the rest of the world became increasingly available.[9]

In North America, wild American gooseberry varieties were used by Indigenous peoples.[9] When European cultivars were transported by European settlers, they tended to die off,[13] due to Mildew and partly due to poor adaptation to climate.[9] The American Gooseberry was popular among early settlers and trappers, but it did not tend to be grown in gardens as civilization developed.[13] The first American cultivar, Houghton was disseminated in 1848.[13] The pathogenic fungus White Pine Blister Rust was accidentally introduced into North America, causing serious damage to American White Pines (and also Black Locust and Sugar Maple) which have little genetic resistance. Some European and Asian white pines (e.g. Macedonian Pine, Swiss Pine, Blue Pine) are mostly resistant to the disease, having co-evolved with the pathogen. After this caused a lot of damage to the logging industry, in the 1930s cultivation and import of gooseberries (along with currants) was banned.[5] Gooseberry cultivation remains illegal in some parts of the USA (e.g. Maine). As a result of this, and combined with easy availability of imported exotic fruit, gooseberry growing is significantly less common in North America than it was historically.[5][9]

One source from 1990 claimed there were 4884 cultivars of gooseberry worldwide at the time.[12]

Native range is Europe and North-West Africa (Atlas Mountains).[17] It is sometimes debated whether gooseberry is native to the UK,[18] but it almost certainly is.[7] 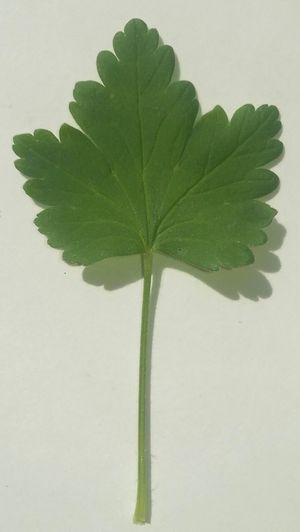 Leaves are 3 or 4 lobed and have blunt toothed margins.[7]

Flowers are green-white,[15] or green-red and drooping.[7]

Fruit are grape sized but more rounded.[7] They are usually hairy.[7] Most are green, but some cultivars are red, yellow or white.[14] Fruit grow singly or in clusters of 2 or 3. On a branch, the fruit closest to the main plant is usually the largest.

Gooseberry is relatively long lived,[18] bushes will crop for about 25 years.[15]

The roots are shallow but spread laterally to a significant degree.[19]

Hermaphrodite (has both male and female organs).[20] All gooseberry varieties are self fertile (one plant can pollinate itself and fruit by itself).[15][14] Flowers in March - May.[20] Flowers fairly resistant to frost.[15] Bee & insect pollinated.[15][20] Vegetative reproduction also occurs by suckers.

Slight preference for heavy soils, and moist but well drained soils, but can grow in almost any soil.[19][20] If the soil is known to have low potassium levels, this should be improved first.[18] Gooseberry has a reputation for tolerating very poor soils, but some experts state this is partly misconception since neglected bushes can survive for a relatively long time.[12] Phosphorus and Potassium levels of 100ppm and 150ppm should be sufficient for gooseberry.[12]

Full sun.[15] Unless summer temperatures are high, in which case some shade is desirable.[14] In sunny conditions, the fruit ripens earlier and has a better taste.[18]

Tolerates quite a lot of shade.[15] Under shaded conditions crop yield is reduced, and it tends to be more "leggy", growing taller and narrower to try and get to the light, and fruiting higher up (which can be a more convenient height for harvest).[15][18] When designing placement, aim to provide some direct sun for part of the day, or good indirect sun for most of the day.[18]

They can be grown on north-facing walls.[18]

Fairly sheltered.[16] Gooseberry is a bit more tolerant of wind than other soft fruits, but do not expect them to fruit reliably in exposed conditions.[18] Cold winds during flowering can mean no gooseberry crop for that growing season.[18]

Overall, gooseberries are quite easy to grow.[21] Typically purchased from suppliers as bare-rooted or potted bushes, usually 1 year old rooted cuttings. Select stock that looks strong with at least 3 good shoots.[1] Advised times to plant range from: winter,[15] or autumn-winter,[19] or autumn to spring.[21] Plant when the weather and soil are favourable,[21] i.e. not during frost and not straight after heavy rain. To prepare the site, one method is to dig deeply and mix manure or compost in the top layer, over a wide area (gooseberry has shallow, lateral spreading roots).[19]

Gooseberries are good for small gardens since they fruit heavily and do not take a lot of space (particularly if trained as cordons), and can also be used to utilise shaded areas.[19] Gooseberries can even crop fairly well in a tub, e.g. on a patio.[16] Gooseberries can be grown as hedging, but fruiting may be unreliable in this role.[18]

In a temperate climate forest garden, gooseberries perform excellently in the shrub layer since they are quite shade tolerant.[15] Along with other Ribes spp. such as blackcurrants (R. nigrum) and redcurrants/whitecurrants (R. rubrum), some consider gooseberries to be the backbone of the shrub layer.[11] They are woodland plants in their natural state.[11] Some even state that gooseberry is one of the most useful plants for the shrub layer. Comparing to the other Ribes spp, gooserries are more shade tolerant than blackcurrants, and less prone to birds than red/whitecurrants.[18]

There are a few particular considerations when selecting cultivars for a forest garden, more shade tolerance is desirable, and some authors highlight "Whinham's Industry" to be best suited for the partly shaded conditions of the shrub layer.[18][11] In the very sheltered conditions of a forest garden, mildew is more likely, so mildew resistance is important.[18] For gooseberries, frost is less of a concern in the forest garden.[18]

In terms of antagonistic plant placement near gooseberry (negative allelopathy), the species does not have many "enemies" among other plants. For example, trees like walnut release a phytotoxin (juglone) from their roots, which destroy most other nearby plants. Gooseberries however are resistant to this.[22]

To maintain healthy plants and heavy cropping, proper fertilization is required.[12] Nitrogen and potassium (potash) in particular are the main nutrient limiting factors for growth and cropping of gooseberry plants,[12] although too much nitrogen can promote weakness to mildew.

Gooseberry plants are moderate in their water requirements, about 30mm rain per week during the growing season (Northern USA and Southern Canada).[12]

Overall, gooseberry is not prone to pests and diseases:[21]

Harvest can begin before the fruit are fully ripe.[21] Acidic, green gooseberries can be harvested in May but they need to be cooked.[15] This is earlier than most other fruit is available.[18]

Once fully ripe, fruit can be eaten raw. If early and late fruiting cultivars are both grown, harvest can continue until August.[18]

Pick the fruit with some stalk left attached (remove before storing).[21] One method of quickly harvesting gooseberries is to pull the branches through your hand while wearing a thick glove. Catch the fruit in a sheet. To separate the fruit from fallen leaves and thorns etc, place the contents of the sheet down a board which allows the round fruit to roll down into a container.[19]

For cultivated varieties, yield is about 4kg per year per mature bush under full sun conditions.[15] Yield is reduced in shade.[15] Per plant yields are less for mature cordons (approximately 0.5-1.5kg per cordon) but usually the reduced space requirements of cordon trained plants mean that more plants can be grown in the same area of space.

Fresh fruit will store for only 1-2 weeks.[15] Can be frozen, bottled, pickled or made into jam or other preserves (see: Uses).[21]

This book source has many recipes for gooseberry:[4] For recipes where the gooseberry will be sieved, there is no point topping and tailing the gooseberries.[4]

Page data
Retrieved from "https://www.appropedia.org/w/index.php?title=Gooseberry&oldid=686649"
Cookies help us deliver our services. By using our services, you agree to our use of cookies.
Categories:
Maintenance categories:
About Appropedia · Policies · Contact · Content is available under CC-BY-SA-4.0 unless otherwise noted.