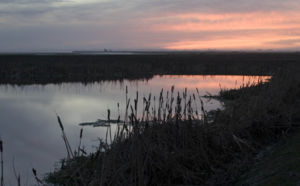 Wastewater treatment effluent or discharge is the final product from a wastewater treatment plant. Because of the Federal Clean Water Act, the requirements for the treatment of the water is set on a plant-by-plant basis determined by the National Pollutant Discharge Elimination System (NPDES). The majority of effluent is discharged into a body of water, but it also has its uses.

Effluent can have a variety of uses, although most effluent is dumped into rivers and large bodies of water(Figure 2) it is also used for irrigation and industrial use as well. Effluent is also can be used to enhance wetlands and marshes (Figure 1) which can attract more wildlife to the region and possibly create a recreational area. Spraying or injecting the discharge into the ground above a non potable aquifer and letting it seep down is a common way of routing the water for industrial use, but using the effluent directly from the plant for drinking water has been done in the United States on a very limited basis.

Toilet-to-tap or direct potable water has been shunned by the public eye in the United States but as more studies are being done it is gaining popularity. One concern with injecting treated wastewater into potable aquifers is that there are unregulated chemicals from pharmaceutical drugs, and hormones that get past the wastewater treatment. Not only have these been an issue when they are disposed of into a body of water but, if toilet-to-tap methods are used more frequently, these chemicals will be getting into the drinking water in higher concentrations. Currently Orange County in California is involved in a study that is treating and injecting wastewater into a nearby potable aquifer to replenish drinking water supplies. This could possibly be a practical solution for southern California because as much as 85 percent of potable water is imported from northern California and one fifth of the state's energy goes towards the transport of this water. 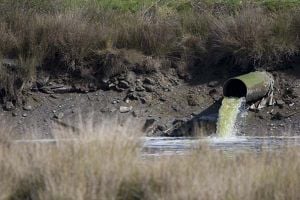 Total Maximum Daily Load (TMDL) is the maximum mass of a pollutant from all point, non-point, and natural sources into a given body of water. The Clean Water Act force all of the states to set a total maximum daily load (TMDL) of their water bodies when it is found that the water body is impaired; Meaning one or more pollutants is causing the water body to exceed the states' water quality standards. Setting a total maximum daily load (TMDL) will determine a set standard for the water quality of that region. This makes it easier to regulate any discharge from wastewater treatment plants or other sources. If the effluent of the applicant is not clean enough to meet the water quality standards from the Total Maximum Daily Load of the region the Environmental Protection Agency (EPA) will reject the national pollutant discharge elimination system (NPDES) application and require them to put into place more stringent expectations and invest in better technology. The Environmental Protection Agency (EPA) determines the specific limitations through Whole Effluent Toxicity (WET) testing.

The environmental protection agency (EPA) is currently working on a effluent toxins trading program somewhat like the one in place for sulfur dioxide air emissions. This is because in some areas certain pollutants are more expensive to remove. Treatment plants who are in the more expensive areas will be able to buy credits of the pollutant from a plant that has surplus credits. A plant gains credits by reducing their output of the pollutant to below what they are required to. This makes it cheaper for some plants to operate, as well as promoting the reduction the amount of pollutants in effluent. Although because some effluents are disposed of in more fragile areas, not every plant will be able to purchase credits; Namely plants in watersheds or preservation environments. The impact on the receiving body of water is important because excessive nutrients, such as nitrogen and phosphorous, and unregulated chemicals such as those found in fire retardant and steroids can cause damage to the ecology of the area.

Sewage effluent is checked for many different polluting factors. These factors vary according to the individual countries' criteria, but in general, the five most important ones are:

In the UK and many other parts of the world, sewage effluent has to meet the 'Royal Commission Standard'. This is a standard that was created in 1913AD as a minimum standard for the quality of wastewater allowed to enter a watercourse. It is a maximum of:

The above quality level will satisfy the vast majority of wastewater discharges, though in very sensitive sites, extra parameters may be set by the Authorities. In the UK, the discharge standard for wastewater is determined on a site by site basis by the Environment Agency, with 95% of sites requiring the Royal Commission Standard and 5% of discharges requiring lower levels and/or phosphorous restraints.

Many chemicals pass through wastewater treatment plants and enter the waterways. Chemicals such as veterinary pharmaceuticals make it into the water by entering run-offs and streams near farms with livestock. Chemicals that have been found in streams, rivers, and lakes include human and veterinary drugs, natural and synthetic hormones, detergent metabolites, plasticizers, insecticides, and fire retardants. The most common of these pollutants being steroids, detergent metabolites, and plasticizers. While there are technologies available that can remove these chemicals but they have so far proven too costly in both money and energy for widespread use. The coastal areas on the south east of Arcata Marsh[verification needed] are particularly bad for sewage contamination. Sewage pipes have been extended into the sea there for years.

Page data
Retrieved from "https://www.appropedia.org/w/index.php?title=Wastewater_treatment_effluent&oldid=634784"
Cookies help us deliver our services. By using our services, you agree to our use of cookies.
Categories:
Maintenance categories:
Comments
Privacy policy · About Appropedia · Disclaimers · Mobile view · Content is available under CC-BY-SA-4.0 unless otherwise noted.
</html