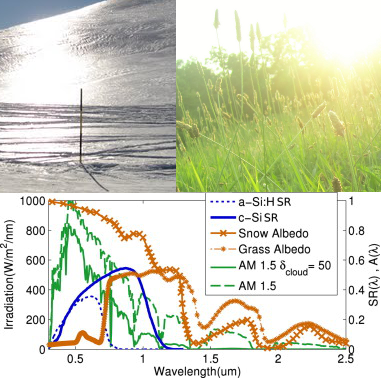 In this paper the theory of mismatch factor of the terrestrial solar spectrum is extended to more accurately represent the irradiance available to specific types of photovoltaic (PV) materials from surface albedo. Using spectra derived from the SBDART radiative transfer model, the effects of a spectrally responsive albedo are illustrated by the differences between the spectrally weighted albedo of hydrogenated amorphous silicon (a-Si:H) and crystalline silicon (c-Si)-based PV technology compared to traditional spectral-integrated albedo predictions. In order to quantify this effect for varying representative spectra, spectra for cloud optical thicknesses from 0 to 150 were investigated. Grass was found to be a poor reflector in the a-Si:H spectral response range with a spectrally responsive albedo of 0.08–0.07 as cloud optical thickness increased from 0 to 150, whereas snow is a good reflector with a relatively constant spectrally responsive albedo of 0.94 as cloud optical thickness increased from 0 to 150. For c-Si PV systems the spectrally responsive albedo for snow and grass were found to be 0.87–0.91 and 0.24–0.15 as cloud optical thickness increased from 0 to 150, respectively. These values can be compared to the albedo typically predicted from spectral integration relative to an AM1.5 spectrum of 0.78 for snow and 0.23 for grass. On a yearly basis, the use of improper albedo values can lead to an under-prediction of system yields of 0.04%, 2.4%, and 10.5% for systems at 25°, 40°, and 90° tilt from the horizontal, respectively. This can lead to improper PV systems optimization and masking of other loss mechanisms. The results of this study have implications for both solar systems evaluation and systems design, and supports further research on tailoring PV technologies specifically to the climate and geographic location where they are deployed.

Effects of spectral albedo on a-Si and c-Si PV