The Water Buffalo New Prospects for an Underutilized Animal 14 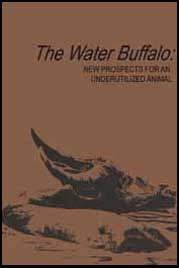 This report has outlined the water buffalo's apparent merits, but most of the statements made about the animal are based on empirical observations. Many of its most exciting and potentially valuable features have not been subjected to the careful scrutiny needed to confirm their validity.

Despite the fact that there are 130 million or more water buffalo in the world, research on the animal is scanty and limited to only a few situations and sites. Quantitative information (especially for the various breeds), tests, trials, and comparison studies are needed.

The research to be done on the water buffalo offers scientific challenges that can be undertaken in laboratories and experiment stations in most parts of the world and in many disciplines: breeding, physiology, microbiology, veterinary science, nutrition, food science, dairy science, and other fields. Water buffalo research is an area worthy of financial support by philanthropic institutions and international development agencies concerned with problems of food and resource shortages. The dominant role of the buffalo in the rural economies of Egypt and Asian countries offers the opportunity for buffalo research that can bring improvements quickly and easily to the rural poor. For other countries the water buffalo is an untapped resource, and they should test its productivity on native pasturelands, marshy lowlands, hot and humid areas where cattle do not thrive, and on areas prone to cattle diseases and parasites that are difficult to control.

Cattle and water buffaloes are obviously different animals. Each has its own limitations and advantages, and each deserves to be studied in its own right. Perhaps the quickest way for animal scientists to experience for themselves the merits of the water buffalo is to conduct their own comparative trials with buffaloes and cattle in their areas. The results will provide local guidance and will help extend recognition of the buffalo's value, especially under difficult conditions where it may exceed cattle in productivity and profitability.

In some countries (Thailand, Malaysia, and Indonesia, for example) buffalo populations are decreasing dramatically. High demands for meat are causing slaughter at younger and younger ages. Much of the meat is exported to restaurants and markets in Singapore and Hong Kong. Unfortunately, the largest and quickest growing animals are often selected for slaughter. This results in the loss of a major genetic resource, which is compounded by the practice of castrating the largest males to make them more tractable as work animals. Ten years ago in Thailand it was common to find buffalo weighing 1,000 kg; now it is hard to find 750-kg specimens. A similar situation exists in the Philippines where there is no dearth of good breeding stock, but butchers are paying such high prices that farmers are selling even quality animals for slaughter. In northern Australia, where some of the bulls weigh almost 1,200 kg, the largest animals are being shot for meat, hides, pet food, or sportsmen's trophies,

A large number of high-yielding buffaloes are taken each year to big cities in India (for example, Bombay, Calcutta, Madras) for milking. At the end of lactation many are returned to the villages, but many others are slaughtered, rather than being fed and retired. This creates a huge loss of valuable germ plasm. In many locations most of the largest animals have already been lost. Only urgent action will protect those remaining.

The importation of buffaloes presents difficulties for any government, researcher, or farmer wishing to obtain the animals for the first time or for breeding purposes. Quarantine laws make it extremely difficult and expensive to exchange genetic resources.

Australia is one of the few nations where there are large numbers of water buffalo in an area free of the major animal diseases. Papua New Guinea,

Nigeria, Colombia, Venezuela, and other nations have taken advantage of this and have imported Australian buffaloes. But Australian herds are all Swamp buffaloes(The island of Guam is also a safe source of Swamp animals, although the feral herds there are depleted, only 300 or 400 animals were left on Guam in 1978) and so breeding centers should be set up also (in Sri Lanka and Italy perhaps) where importers can obtain River-type (including Mediterranean) buffaloes.

Worldwide efforts should be made to select superior buffalo bulls and cows for breeding.

Performance testing, leading to the mass selection of superior animals, deserves high priority. Virtually all buffalo breeding is haphazard and unplanned. Village animals graze together and matings are usually not con" trolled, observed, or recorded. Thus, the full genetic potential of the water buffalo is not being realized.

A massive selection program is needed to bring about genetic progress. For each breed, bulls and cows with the potential for improving production of meat and milk and increasing draft power should be identified and used for breed improvement. However, the wide variations between the characteristics of individual animals may make exceptional genetic advances difficult to achieve quickly.

Important traits for culling and selection include behavior, temperament, reproduction rate, easy milk letdown, average daily gain in weight or weight at a given age, carcass quality (for example, large hindquarters), and milk production, as well as strength and endurance for work.

The use of artificial insemination and deep-frozen semen should be a major help in upgrading the buffalo. Moreover, the transport of live embryos (rather than neonatal animals) for implantation in the uterus of surrogate mothers could be important for water buffalo. It seems unlikely, however, that buffalo embryos can be implanted in cattle.

Most genetic selections should be made in Asia where 97 percent of the world's water buffaloes are located. The improvements will depend on how accurately bulls can be identified, selected, and mated. Performance and progeny testing is sorely needed at research stations as well as "on the farm." Governments should also institute bull-loan or artificial-insemination programs as a means for upgrading the village herds.

The relative merits of the various buffalo breeds should be determined,

Little or no information is available on the comparative performance of the different buffalo breeds in various environments, especially the 17 or so River breeds in the Subcontinent and the Egyptian and Mediterranean breeds. Comparison trials of the breeds and breed-crosses are needed in a wide range of climates from the humid tropical to the temperate. In addition, the cytogenetic, immunogenetic, and inheritance relationships of breeds should be clarified.

The panel encourages countries such as India and Pakistan that have a number of buffalo breeds (for example, Murrah, Surti, Jafarabadi, Mehsana, and Nili/Ravi) to set up experimental farms for scientific reproduction of superior specimens. Substantial research benefits as well as profitable economic returns from using and exporting some of them would be realized.

Research and demonstration is needed to foster the widespread consumption of buffalo meat and milk.

Buffalo milk, cheese, and other dairy products are considered outstanding foods in all locations where they are produced. Taste tests so far have indicated that buffalo meat is similar or slightly superior to beef produced under the same conditions.

A specific need is to feed the male calves and use them for meat. Many are now slaughtered at a young age and light weight. Research that provides either a partial or complete milk substitute for feeding calves would have a major impact on meat supplies and farmer income. Diets being developed for calves in Egypt incorporate such ingredients as whey, soybean meal, corn flour (corn starch), and yeast.

Other research topics include:

The panel recommends research on new harnesses to replace the omnipresent yoke.

As already noted, the wooden yoke, which has not changed in 1,500 years or more, is an inefficient harness. Research is needed to adapt horse collars, hames, breast straps, and other devices for the buffalo. Because much of the farm power in Asia comes from buffaloes, the impact of improved harness could be dramatic, widespread, and of enormous value to millions of small farmers there. If the experiments in Thailand described earlier are an indication, the farm power in Asia could be increased by 25 percent overnight with the adoption of an improved harness. The buffalo will continue to be the small farmer's "tractor," so the benefits from improved harnesses are likely to continue for a long time.

There are 13 million buffalo and bullock carts in India and 20 million Indians are engaged in the business of road haulage. Application of appropriate technology would eliminate the archaic wooden wheels, axles, and heavy carts and substitute lightweight carts, perhaps with such features as metal wheels, pneumatic tires, ball bearings, and fixed axles. With such improvements, loads might be increased and hauled over longer distances at greater speed and with less work.

Testing of water buffalo production is needed in many areas where the animal is not known.

A seemingly adaptable animal, the water buffalo should be productive throughout the earth's warm temperate, subtropical, and tropical zones. Different breeds may adapt differently to extremes of heat, humidity, and cold, and this needs further study.

The United States, the Mediterranean Basin of Europe, and some of the more temperate European areas like southern England are worth considering for water buffalo trials. In the Southern Hemisphere River buffaloes are already found as far south as 25° latitude in Brazil's Sao Paulo State (where large herds are raised); an experimental herd of Swamp buffaloes has performed outstandingly in Brisbane, Australia (27°S); and there are a few Swamp buffalo in South Australia and Victoria (35°S or more). There is good reason to believe that water buffaloes may be productive in all of the states in Australia, New Zealand's North Island, South Africa, Argentina, and other warm temperate areas of the Southern Hemisphere.

The biggest void in the water buffalo map is virtually the entire continent of Africa. It seems a paradox that the buffalo-Egypt's most important domestic animal-is not farmed commercially in any other African country. Experimental herds have been introduced to Nigeria, Uganda, Mozambique, Tanzania, and other countries in the past, and the initial success of three of them is described in Appendix A.

The water buffalo, with its tolerance for heat, disease, poor-quality feed, and mismanagement, appears to have outstanding promise for African nations such as Sudan, Tunisia, Morocco, Senegal, and The Gambia as well as all nations south of the Sahara (Nambia perhaps being an exception).

Despite observations of the buffalo's ability to utilize poor quality forage, research is needed to learn how the animal does it.

Little is known about the farm management factors that influence water buffalo productivity. Studies and extension literature for farmers are needed on subjects such as:

Research is needed in areas where uncertainties about buffalo diseases are hindering the animals' use.

Research topics should include:

The panel recommends that two water buffalo publications be produced.

In addition, other methods for disseminating water buffalo information are to be encouraged.