From Appropedia
< Small Scale Oil Extraction from Groundnuts and Copra 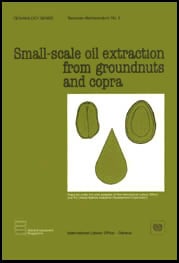 The extraction of vegetable oils from oilseeds is a well-established industrial activity in a number of developing countries. This is due to the fact that, since the early 1950s, most oilseed-growing countries have favoured indigenous oil extraction in preference to the export of oilseeds. They have thus supported the setting up of factories for this purpose, which, to a great extent, are large-scale plants situated in or near urban areas.

I.1 Scope of the memorandum[edit | edit source]

This memorandum is primarily concerned with the choice of technology for the extraction of unrefined oil from groundnut kernels and copra by small-scale mills located in rural or small urban areas. This follows from the fact Chat a great majority of the population in developing countries reside in rural and small urban areas, and that the techniques they use for oil extraction offer substantial scope for improvement. Another important reason is that the extraction of unrefined oil at small-scale levels does not require sophisticated technology.

The inputs of raw material associated with the terms small-scale, medium-scale and large-scale used in this memorandum are as follows

I.2. Oilseeds considered in the memorandum[edit | edit source]

There are a number of types of oilseeds grown in developing countries. This memorandum, however, considers only the extraction of groundnut oil from groundnut kernels and that of coconut oil from copra. A number of factors led to this choice, including the following: a significant indigenous consumption of groundnut and coconut oils in all the oilseed-producing countries; a substantial demand for unrefined oil in these countries; and the relatively high oil content of coconuts and groundnuts.

I.3. Technologies covered by the memorandum and target audience[edit | edit source]

The memorandum considers the use of expellers at small-scale levels as well as that of power ghani units (small-scale).1 The oil extraction techniques associated with these two types of equipment are described in sufficient detail to allow their application by small-scale entrepreneurs. An economic analysis of both small-scale and large-scale production units is also undertaken in order to enable interested government officials to compare the socio-economic impact of alternative oil extraction technologies.

1 The power ghani mill is an improvement of the traditional ghani mill used in India for the crushing of oil seeds. For detailed information on this type of mills, see Chapter III.

The organisation of the chapter on processing techniques (Chapter III) describes the processing associated with each technique as well as other aspects, such as daily usages, labour requirements, equipment schedules and a recommended floor plan.

The memorandum is primarily intended for entrepreneurs who either wish to upgrade an existing oil plant (in terms of efficiency), or are considering to start a small-scale oil-extraction unit. It should also be of interest to small holders who may wish to process their produce, either groundnuts or coconuts, into the respective oil.

Chapter II considers briefly the raw materials covered by this memorandum, namely groundnuts and coconuts. It then proceeds, in greater detail, to outline the pre-processing stages involved with respect to these materials. In particular, the chapter reviews a number of techniques used in developing countries to dry copra. It may be noted that in most cases, the processing of fresh coconuts into copra is undertaken at the farm rather than at the oil-extraction plants. On the other hand, the shelling of groundnuts is often carried out at the plant as shelled]]]]]] nuts tend to spoil faster than non-shelled nuts.

Chapter III describes in detail the various oil extraction technologies, while Chapter IV analyses the economic efficiency of these technologies. Chapter V analyses the socio-economic implications of choosing a particular technique in preference to others.gfhdgfhdgfdhfgdhfgdhfgvbcvbv ==